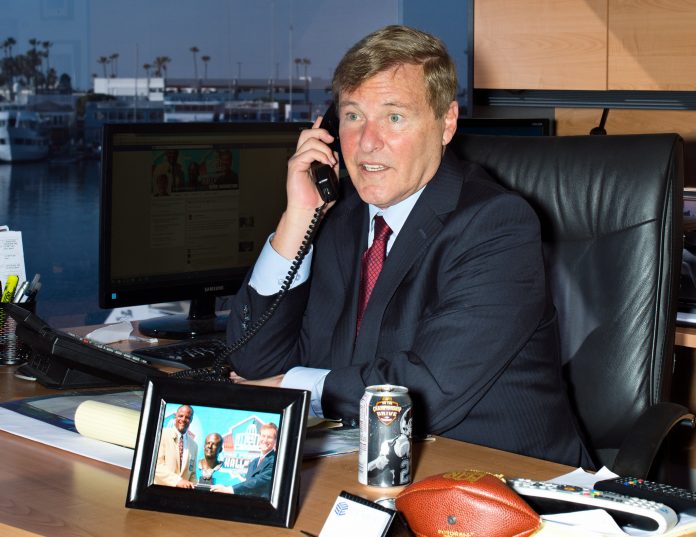 One of the first big-time sports agents and still perhaps the most famous of all time is Leigh Steinberg—indicated best by the fact that he was the inspiration for Jerry Maguire. His first client was Steve Bartkowski, the first overall pick in the 1975 NFL Draft.

Steinberg helped pioneer the sports agent profession, but when he began representing NFL players, they weren’t guaranteed the right to have an agent represent them, and teams could just say they didn’t deal with agents. Despite this challenge, he still managed to negotiate the largest rookie contract in NFL history at the time for Bartkowski.

Even after that, Steinberg did not think being a sports agent was in his future. However, what kept him going wasn’t the opportunity for money or fame or even for working in sports—it was the opportunity to help others by having influential clients.

“I saw the tremendous idol worship and veneration that athletes [received],” Steinberg said. “My dad had these core values he raised with…to try to make a meaningful difference in the world and to help people who couldn’t help themselves, and I saw that the athletes who served as role models and triggered imitative behavior, and that was really an attractive concept.”

A large part of Steinberg’s approach to his career has been the focus on philanthropy and getting athletes to donate and support worthy causes. According to an ESPN article published in 2002, Steinberg’s clients had donated more than $60 million to charities throughout his career.

His penchant for helping others and doing good always came from his family, and it was always one of the most important things for him, rather than trying to earn a lot of money and get rich.

“I never looked at it like money was the goal, [that] wasn’t the way I was raised, but being able to make a change, having athletes who set up charitable programs,” Steinberg said. “Having those cutting edge athletes was something I was really motivated to try to dominate the field in that way, for what I thought was good.”

While it wasn’t his main focus, Steinberg did make a lot of money and was quite famous, but despite what he earned in the 1970s, 80s, and 90s, Steinberg wasn’t immune to the struggles that everyone faces.

Steinberg has dealt with financial problems through some parts of his career, and they seem to have stemmed from the alcoholism he struggled with. Now, however, he has reached nearly nine years of sobriety and has started to work as an agent again, representing young talent such as Patrick Mahomes.

He isn’t quite where he was before his struggles, when he represented eight number one NFL draft picks and 60 other first round draft picks, but that isn’t what he is striving for.

“I’m not trying to compete with my former self, I don’t think anybody will statistically do those things again, I think it’s impossible,” Steinberg said. “My major goals are resurgence, renewal in the lives of new young athletes.”

Steinberg is certainly taking a different approach to life and work now that he is sober, as his main focuses are his sobriety, being a good father, and third is running his business. While some of his goals may have changed, his main concentration on athletes using their star power to make the world a better place has remained the same.

“It’s the same rewarding teacher, coach, mentor concept as before,” Steinberg said. “But then it’s also what can we tackle in the world?”