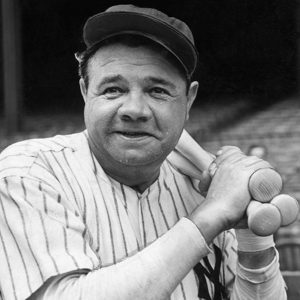 The greatest home run hitter of his or any other time, Ruth’s celebrity would rival that of movie stars, presidents and royalty, his arrival on the national stage dovetailing with the onset of the age of radio, tabloid newspapers, mass advertising. “It wasn’t that he hit more home runs than anybody else,” wrote New York Times columnist Red Smith. “He hit them better, higher, farther, with more theatrical timing and a more flamboyant flourish.”
When someone once noted Ruth was being paid more than the president, Herbert Hoover, he famously quipped: “Why not? I had a better year than he did.’’
He was a one-man marching band, ticker-tape parade, fireworks show, and circus come to town, the creator of magic, the subject of myth-making, and the man so critical to the emergence of the New York Yankees as the dominant franchise in team sports that when Yankee Stadium was constructed in 1923, it was called “The House That Ruth Built.”
“More than a century after his major league debut, Babe Ruth remains the lodestar of American fame,’’ author Jane Leavy wrote in The Big Fella: Babe Ruth and the World He Created.” “And that star has not diminished. By any standard or metric, Ruth remains the most remarkable player in history. He is still ranked first in slugging percentage (.690), and is the first in the newer, chic, modern metrics of on-base slugging (OPS) and wins above replacement (WAR).’’

Born in a poor working-class neighborhood of Baltimore, Ruth spent the first years of his life living above his father’s tavern before his parents dumped him off at age 7 to St. Mary’s Industrial School for Orphans, Delinquent, Incorrigible and Wayward Boys. “I had a rotten start and it took me a long time to get my bearings,’’ he said.
Ruth became a symbol of unlimited American possibility, the child who came from nothing to become adored by millions.

“He was the original ‘natural,’’’ Washington Nationals general manager Mike Rizzo told Leavy. “He picked up a ball at St Mary’s and became one of the best left-handed pitchers ever. Then he said, ‘Screw it, I’d rather hit, and became the best hitter ever.’’
Ruth was 19 when he joined the Boston Red Sox in 1914 and quickly established himself as one of the best left-handed pitchers in baseball, leading the league in ERA (1.75) in 1916, winning 20 or more games twice, and pitching the Red Sox to the World Series three times, setting a record for consecutive scoreless innings (29 2/3) in the Series until Whitey Ford of the Yankees broke the record in 1961.
“I had thought he was a lousy pitcher who they made into a hitter,” Ford told reporters. “I looked at the Baseball Encyclopedia one day and was stunned at what I found out.”

Playing part-time in the outfield for the Red Sox, Ruth led the American League in home runs with 11 in 1918, and there was no going back. In 1919, when he still made 15 starts as a pitcher, Ruth hit a record 29 home runs and opened a game that until then had relied on slash hits, bunting and running to generate offense to what could happen if a player swung from the heels, demonstrating the value of launch angle long before its 21st-century incarnation. But it was after his controversial sale by the Red Sox to the Yankees after the 1919 season that Ruth truly became “The Babe,” an everyday outfielder who single handedly ended the “Deadball Era” as team owners awakened to the public’s appetite for the longball. In 1918, there was a greater likelihood of meeting a survivor of the Titanic than seeing a home run, according to baseball economist Michael Haupert. Ruth changed all that.

And while he was paid handsomely for the time, his bosses reaped the riches as well. Haupert estimated that of the $3.4 million profit the Yankees earned while Ruth was on the team, about 37 percent could be attributed to his popularity. And with the help of Christy Walsh, who is regarded as the first player agent, Ruth made even more than the $80,000 he commanded as his top salary by endorsing everything in sight, barnstorming, performing vaudeville, even making a movie, a fledgling art form at the time.
He hit 54 home runs in his first full season with the Yankees, 1920, 59 in 1921, and 60 in 1927, a record that held until Roger Maris broke it in 1961. In all, he hit 714 home runs, a record that would stand until Hank Aaron hit No. 715 in 1974.

He became a symbol of power and unbridled appetite, an American original who became the first star, biographer Leigh Montville wrote, “to avail himself fully of the machinery of fame.” He was, Montville said, “the patron saint of American possibility.”
It’s almost impossible to conceive that this discarded child—not an “incorrigible” or orphan as earlier biographers had suggested, a myth that Leavy dismantled with her scholarship—would become an innovator the equal of an Edison, Einstein or Elvis, as Montville noted. He was one of the first electees to the Hall of Fame in 1936.

“You know, I saw it all happen from beginning to end,’’ a Boston teammate and fellow Hall of Famer, Harry Hooper, told Lawrence Ritter, author of the Glory of Their Times. “But sometimes I still can’t believe what I saw: this 19-year-old kid crude, poorly educated, only lightly brushed by the social veneer we call civilization, gradually transformed into the idol of American youth and the symbol of baseball the world over—a man loved by more people and with an intensity of feeling that has perhaps never been equaled before or since.

“I saw a man transformed from a human being into something pretty close to a god. If somebody had predicted that back on the Boston Red Sox back in 1914, he would have been thrown into an insane asylum.’’