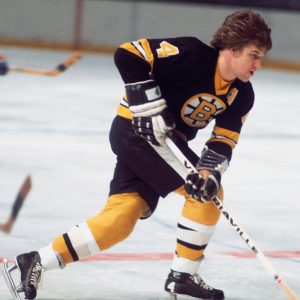 Bobby Orr was not only a transcendent talent, he transformed the sport of hockey, reimagining the impact a defenseman could make on the way the game was played.

From the time he arrived in Boston in 1966 at the age of 18, already heralded as a savior of the Bruins, the native of Parry Sound, Ontario shattered the constraints on what had always been a defense-first position, dazzling fans and foes alike with an attacking, aggressive style that exploded forever the notion of what a blue-liner could do.

“Bobby has all the tricky moves, the fakes and blocks that excite the experts,’’ Bruins coach Tom Johnson told Sports Illustrated. “He does things that no other hockey player can do, and a lot of people just take it for granted. But he also does the things that excite the newcomer: the rink-long rushes, the hard body checks and that whistling slap shot of his. He has the quality of directing the attention to himself. He runs things. The puck is on his stick half the time. If you’re looking at your first hockey game—and lots of people are nowadays—all you do is watch Orr and you catch on fast.”

The 5-11, 175-pound Orr was a gifted skater, one who needed just three or four strides to reach full speed, with unmatched quickness and mobility. He was deceptively strong, fearless and tough, unafraid to charge the net or drop the gloves.

“Pound for pound, he might’ve been the toughest guy in the game,” said Pat Quinn, who was a rookie Toronto defenseman in 1970 when he leveled Orr with a blue-line hit that left him with a concussion. “He wasn’t a hold-and-throw like a lot of guys. He could go with both his hands, like a prizefighter.”

In 1969-70 Orr became the first NHL defenseman to exceed the 100-point threshold, scoring 33 goals and a league-leading 87 assists for 120 points. He scored 100 or more points in a season six consecutive times (Paul Coffey with five is the only other defenseman in NHL history with multiple 100-point seasons).

He is the only player to win the Stanley Cup and Conn Smythe (playoff MVP), Hart (MVP), Art Ross (scoring) and Norris (top defenseman) trophies in a single season (1969-70). He is the only NHL defenseman to have nine hat tricks in his career, and in 1970-71 set single-season records for assists (102), points by a defenseman (139) and rating (plus-124). He led the league in assists five times.

“When I first saw him, it was like an old horse trainer who finally saw Secretariat,” said another of his Bruins coaches, Don Cherry. “He changed how defense should be played. He broke the mold because before that, defensemen were big, slow guys. They just cleared the guys out and got the puck up. Bobby changed the whole face of the game and how it’s played.”

Orr was voted the league’s top defenseman eight years in a row, its MVP three times, its playoff MVP twice. He led the Bruins to Stanley Cup championships in 1970 and 1972; his Cup-clinching goal against the St. Louis Blues, in which he is tripped up and sent flying after shooting on net, resulted in one of the most iconic hockey photos of all time, a pose of Orr in midair that inspired a life-sized sculpture that stands outside TD Garden.

He was the unmistakable leader of a team that became known as the Big, Bad Bruins. “I have never run into any player who brings the intensity that he brought,” Harry Sinden, who spent 45 years as a coach or front office executive, told SI. “His silence, his looks, were enough to tell you if he didn’t like what was happening. And he made the rest of us the same way. You could not be around him without feeling that and getting in line.”

Orr missed the 1972 Summit Series, the first competition between the vaunted Soviet Union national team and a team of NHL stars, with a knee injury. But four years later, in the Canada Cup in 1976, Orr was voted the team’s most valuable player, even though by then multiple knee injuries had taken a severe toll.

Shockingly, Orr left the Bruins for the Chicago Black Hawks after the 1975-76 season. Orr later contended that his powerful agent, Alan Eagleson, in whom he had placed full trust, never informed him of an offer that the Bruins made that would have given him an ownership stake in the team. He played just 26 games over the course of two-plus seasons with the Hawks, sitting out the 1977-78 season after knee surgery. He scored his final goal on Oct. 28, 1978, and announced his retirement in a tearful press conference 11 days later.

“I couldn’t cut, I couldn’t accelerate, I couldn’t play at the level that I expected of myself anymore,’’ Orr later said. “I had always said I would play until I couldn’t skate anymore. Finally, I knew that day had come.”

But in the years since his playing days, Orr’s legend has only been further burnished in Boston, where he is accorded a place upon the city’s mythical Mt. Rushmore of great athletes, alongside Ted Williams, Larry Bird and Bill Russell.