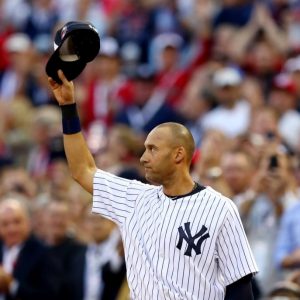 Derek Jeter was to the New York Yankees of the late 20th century and first decade-plus of the 21st Century what Babe Ruth, Joe DiMaggio and Mickey Mantle were to earlier incarnations of pinstripes: the face of baseball’s most storied franchise.

But the Hall of Fame shortstop’s impact on the game went beyond just one team, as baseball commissioner Bud Selig articulated in a letter that he wrote to Jeter in 2009, when Jeter served as captain of Team USA in the World Baseball Classic. Selig called him “Major League Baseball’s foremost champion and ambassador.’’

“You embody all the best of Major League Baseball,” Selig wrote. “…You have represented the sport magnificently throughout your Hall of Fame career. On and off the field, you are a man of great integrity, and you have my admiration.”

In his 20 seasons with the Yankees, Jeter’s teams won five World Series titles, creating an aura of winning that began when he was named unanimously as the American League Rookie of the Year at age 21 in 1996, when the Yankees won their first World Series title in 18 years, and remained until his retirement at age 40 in 2014, when he delivered a walk-off hit in his last at-bat in Yankee Stadium. And he did so with a preternatural constancy, serene confidence, unwavering determination and an old-fashioned humility.

“If you’re accomplished,” Jeter once said, “people will talk about it for you. You don’t have to point it out.”

Elected to baseball’s Hall of Fame in 2020, falling one inexplicable vote short of being a unanimous selection, Jeter’s bronze plaque in Cooperstown describes him as the “heartbeat of a Yankee dynasty”—17 postseason appearances, seven American League pennants, five Series rings. The Yankees won three straight World Series (1998-2000) and appeared in the postseason 11 consecutive times.

“Everything he does has such a grace about it,” A’s general manager Billy Beane told Tom Verducci of Sports Illustrated, after Jeter–who was named the team’s captain by owner George Steinbrenner in 2003–won the World Series for the final time in his career. “Even now, people would say to me, ‘You must be rooting against the Yankees.’ But you know, maybe because of Jeter, the Yankees know how to win. It’s not an act. The Yankees’ brand name in this era is that it is Jeter’s era. It’s similar to what DiMaggio was in his era.”

“I don’t think anybody can say one thing about bad about Derek,’’ said basketball’s Michael Jordan, who was to winning in the NBA (six titles) what Jeter was in MLB. “He’s a complete champion. He carries himself like every professional baseball player, or professional athlete, should.’’
Jeter finished his career with 3,465 hits. Hit No. 3,000, a home run off Tampa Bay left-hander David Price, came on July 9, 2011, at Yankee Stadium, in a game in which Jeter went 5 for 5. He was the first Yankee to accumulate at least 3,000 hits, the 14th player to do so with one team, and the second to hit a home run for No. 3,000.

Jeter had 200 hits in a season eight times; no other shortstop in baseball history did so more than four. He hit .300 or better a dozen times, and scored more runs, had more hits and reached base more times than any shortstop ever. He also hit double-digit home runs 16 times, stole double-digit bases 17 times and scored 100 or more runs 13 times, all feats never achieved by a shortstop.

Jeter attributes his character to his upbringing in Kalamazoo, Mich., where he was raised by Dorothy and Charles Jeter, the white daughter of a church handyman and black son of a single mother in Alabama.

“He was brought up to respect his environment and respect himself,” Dorothy Jeter said. “When you like who you are, you’re going to respect others. It’s very simple.”

Jeter continues to set standards for excellence in his post-playing career, leading a variety of successful business ventures and entrepreneurial investments while making more history within the game. In 2017, he became part-owner of MLB’s Miami Marlins, for whom he also serves as CEO, overseeing the day-to-day operations for both the business and baseball sides of the team. He is the first African-American to serve in this role for any Major League team. His Turn 2 Foundation, meanwhile, has awarded more than $30 million in grants to create and support signature programs that motivate young people to turn away from drugs and alcohol and “Turn 2” healthy lifestyles.

“A Derek Jeter comes along once in a generation,” former Yankees manager Joe Torre said in a statement when Jeter was voted into the Hall. “By August of 1996 his teammates started looking for him to set the tone and make things happen. Derek was comfortable in his own skin. On the biggest stage in sports, he was never afraid to fail and always kept the game fun.

“Derek respected the game, the fans, his teammates and his opponents. His character, determination and confidence are a wonderful reflection of how he was raised by his parents. It was a true privilege to watch Derek and to be his manager for 12 years. To this day, he still calls me ‘Mr. Torre.’ Today, it is a pleasure to say, ‘Welcome to the Hall, Mr. Jeter!’ You did it with class and grace.”