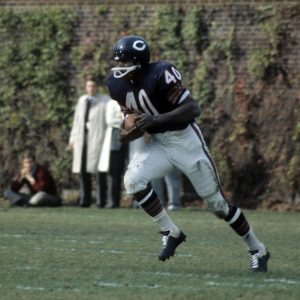 When granted such a tiny opening, Gale Sayers conjured magic, breathtaking runs in which he streaked across a football field like a comet—the Kansas Comet, to be precise, the nickname he carried with him to the National Football League, where his speed, elusiveness, and elegance made him unforgettable in the all-too-brief time he was at the height of his powers.

“Sayers played running back like no other man in pads,’’ wrote Tim Layden in Sports Illustrated, “a blinding talent who could make defenders miss him in a phone booth or outrun them in the open field.’’

Billy Dee Williams, the actor who played Sayers in the beloved movie, “Brian’s Song,” which captured the close relationship between Sayers and a dying Chicago Bears teammate, Brian Piccolo, was enchanted by Sayers’ artistry.

“I sort of equated his running style to ballet—Nijinsky,’’ Williams said, invoking the name of the immortal Russian dancer. “He had that kind of beauty. I loved watching him run. It was poetry.’’

Gale Sayers played just 68 games in the NFL from 1965 to 1971—just 51 games before he suffered a debilitating knee injury in 1968, when he was hit by a diving Kermit Alexander of the San Francisco 49ers in a November game in Chicago’s Wrigley Field. But in that short span, playing during an era when Jim Brown’s strength, power and brute force had set the bar for a running back’s greatness, Sayers dazzled with his spins and twists, feints and sprints, disappearing from the grasp of expectant tacklers like a Houdini in high-topped cleats.

Former Redskins coach Mike Shanahan, who grew up in the Chicago area, said Sayers made it appear “like defenders were trying to catch smoke in the air.”

“He was the best runner with a football under his arm I’ve ever seen,”  said Mike Ditka, who was Sayers’ teammate on the Bears in 1965 and ’66 and later coached Walter Payton, who broke Brown’s NFL rushing records.

George Halas, the legendary Bears coach, was fixated on bringing Sayers to Chicago after witnessing one such act while Sayers was playing for the University of Kansas.

“I couldn’t stand to let Gale go elsewhere after I saw him make a totally unique move in a Kansas game film,” Halas said. “Gale started one way, left his feet and seemed to change direction in the air. When he landed, he was running the opposite direction. When I saw that move, I knew we had to get that young man.”

Sayers, the son of an auto mechanic in Wichita and a two-time All-American at Kansas, where he compiled 4,020 all-purpose yards over three seasons, did not disappoint after being selected fourth in the NFL draft, one pick after Halas selected ferocious linebacker Dick Butkus. More than a half-century later, many regard his rookie season as the greatest performance ever by a first-year player.

Sayers scored a league-record 22 touchdowns, including a record-tying six against the 49ers in one game, when he rushed for four touchdowns, including a 50-yard run, scored on an 80-yard catch and returned a punt 85 yards for a touchdown. He gained 2,272 all-purpose yards that season and was named the NFL’s Rookie of the Year, edging out Butkus.

“It was his ability to change direction running at full speed,” Bears offensive lineman Bob Wetoska said. “Generally, guys who are running straight ahead have to take a side-step to juke everybody. It seemed like Gale would make all his moves going full speed.”

Over the course of his career, Sayers averaged 5 yards per carry, 11.7 yards per reception and 30.56 yards per kickoff return—still the highest in NFL history. He was elected to the Hall of Fame in 1977, his first year of eligibility, at age 34. He is still the youngest player to be enshrined in Canton.

But then came the right knee injury, which required surgery the next day. “Dr. Theodore Fox, who performed the operation, described the injury as a total rupture of all ligaments on the inside of the knee and torn cartilage,” the Chicago Tribune reported.

“Have you ever hunted?” asked former Bears linebacker Doug Buffone, who played with Sayers from 1966 to 1971. “Gale looked like a pheasant in a clearing, where he just stops and then starts over again to make his cut. All the quickness was gone. He took some huge shots that year. It was tough to watch.”

Sayers required surgery on his left knee in 1970, and retired during the 1972 preseason. But by then, he had become a hero to many after the release of the TV movie Brian’s Song, because of the love he displayed for Piccolo, who died at age 26 of cancer.

“Gale had never experienced death,” his ex-wife Linda said years later. “The worst thing that ever happened to him was when he got hurt in ’68. It was like his life was over. And during his comeback year, Brian discovers he has cancer and is dying. It was kind of a humbling experience for him.”

Compounding Sayers’ grief was an auto accident involving Sayers’ parents shortly before Piccolo’s death. His father went into a coma from which he never recovered; his mother sustained multiple rib fractures, and shortly thereafter was discovered to have terminal cancer and died nine months after her husband.

Since its inception in 1970, the Brian Piccolo Cancer Research Fund has raised more than $8.3 million. Before the advanced dementia that ultimately led to his own death in 2020, Gale Sayers was one of its most ardent supporters.

“The legacy Sayers leaves us is about much more than numbers or highlight reels,’’ Chicago Tribune columnist Paul Sullivan wrote. “He taught us how to love one another.”