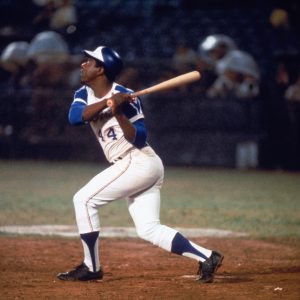 We came late to an appreciation of Henry Aaron’s true greatness as a baseball player. History recognizes him as the man who broke Babe Ruth’s record for career home runs, a monumental achievement to be sure. But Aaron was not a slugger in the classic mold—he never hit as many as 50 home runs in a season–and could not compete with the Babe in charisma and celebrity. No one has yet.

Where we have fallen short is recognizing Aaron, especially while he was still playing, for the consummate player he was. Like Willie Mays and Mickey Mantle and Roberto Clemente, to name his most celebrated contemporaries, Aaron was a splendid fielder, a masterful base-runner, and a complete hitter, but because he lacked their flair and electric presence, he often suffered by comparison.

“You know,” Aaron once said, as recounted by The Athletic’s Joe Posnanski, “If I had to pay to go see somebody play for one game, I wouldn’t pay to see Hank Aaron. I wasn’t flashy. I didn’t start fights. I didn’t rush out to the mound every time a pitch came near me. I didn’t hustle after fly balls that were 20 rows back in the seats.

“But if I had to pay to see someone play in a three-game series, I’d rather see me.”
Aaron did not seek out the spotlight. He just came to work every day, much like his father Herbert, who was illiterate, picked cotton and later did machine work in his native Alabama, but proudly built and owned his own house, a rarity for Blacks in Mobile at the time.

How impossibly consistent was Aaron? Other than for three weeks at the end of his rookie season in which he broke his ankle, Aaron did not go on the disabled list once in his 23 seasons of playing in the big leagues. He played in 25 All-Star Games. He hit 30 or more home runs in a season 15 times, and until the final two seasons of his career, when he’d already turned 40, hit at least 20 home runs each season. He hit .300 or better in 14 seasons; he was 21 when he did it the first time, 39 when he did it the last. He scored 100 or more runs 15 times. He drove in 100 or more runs 11 times. He ranked in the top 10 in on-base percentage 11 times, in the top 10 in slugging percentage 19 times, in the top 10 in stolen bases eight times. He led the league in total bases eight times, more than anyone who has ever played the game. He won three Gold Gloves.

Year after year after year, Aaron was a model of all-around excellence, and we almost didn’t notice. The calculation of his greatness came after he retired, when he was not only lionized for his achievements, but for his character, which was never tested more severely than during his pursuit of Ruth’s record, his most famous accomplishment stained indelibly by the ugly racism he encountered.

As a Black man from Mobile playing in the deep South, Atlanta, Aaron had a deep appreciation for the symbolism of breaking the Babe’s record. He had met Martin Luther King Jr. and Andrew Young and other civil rights leaders after the Braves moved from Milwaukee to Atlanta in 1966, and they recognized that he was furthering their cause on a ballfield.

“He was like Joe Louis knocking out Max Schmeling in ’38 and Jackie breaking the color line in ’47,” Young said. “You got to remember that Martin (King Jr.) didn’t start until ’55. Baseball and Hank opened up a lot of doors in a lot of people’s minds.”

But those open doors came with a heavy price. Aaron was targeted by a brutal hate-mail campaign, thousands of letters seething with racial slurs and death threats, and a kidnapping threat made against his daughter. For nearly three years, Howard Bryant wrote in his biography of Aaron, he required a police escort and an FBI detail for himself and his family. He finished the 1973 season with 713 home runs — one shy of tying Ruth’s record — and believed he would be assassinated in the off-season.
The hate did not keep Aaron from his appointment with destiny. In his first swing of the bat in the 1974 season, he homered off the Reds’ Jack Billingham in Cincinnati to tie the record. And then, four days later, on a rainy Monday night in Atlanta before 53,775 fans in Fulton County Stadium, still the largest crowd in Braves’ history, Aaron hit the record-breaking 715th home run into the Braves’ bullpen off Dodgers left-hander Al Downing.

The crowd serenaded him for 11 minutes. His mother, Herbert alongside, wrapped him in a massive bear hug.

But when it was time for Aaron to address the cheering throngs, a microphone thrust in his hands, he expressed a feeling of relief more than elation, revealing in that moment that his victory lap had for too long resembled a gauntlet of apprehension and suspicion.
“Thank God it’s over,” he said.

Aaron, who had joined the semipro Mobile Black Bears at age 17, played for the Negro League’s Indianapolis Clowns at 18 and was still 18 when he signed with the Braves, ended his big-league career where it began, Milwaukee, after 23 seasons and a career total of 755 home runs.

In his 1991 autobiography, I Had a Hammer, Aaron published some of the “Dear N—” letters he had received during his home run chase, his bitterness still palpable. He had kept many of those letters while eschewing much of the game’s traditional memorabilia. But with the passage of time, and the efforts of most notably baseball commissioner Bud Selig, a lifelong friend, to show Aaron the respect and honor he deserved, Aaron embraced his exalted place in the game’s history. In 1999, Major League Baseball commenced with the Hank Aaron Award, presented to the top offensive performer in each league. And Aaron became an important voice in the effort to promote more Blacks to front-office positions.

On Jan. 22, 2021, Henry Aaron died, 13 days shy of his 87th birthday. President Clinton was among the mourners at his funeral. At the service, broadcaster Bob Costas spoke of how a 14-year-old Aaron had skipped school and climbed a tree to watch Jackie Robinson and the Brooklyn Dodgers play an exhibition game in Mobile in 1948.

“There was no way to know that kid would go on to become, in many respects, the most significant baseball player since Jackie Robinson himself,” Costas said. “That that kid would take the baton from his idol and inspiration and carry it so well, so honorably and for so long. Now, that glorious race has been fully run.”