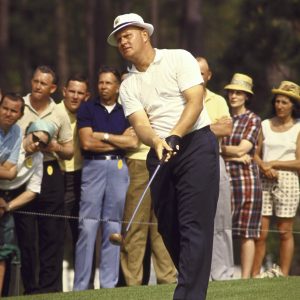 As a kid growing up in Ohio, Jack Nicklaus loved basketball and football and might have elected to focus on one of those sports, he said in a long-ago interview, “if I hadn’t been a year ahead of myself in school, if I could have had one more year and become a big high school star.”

Instead, Nicklaus stuck with golf, and became the greatest champion the sport has ever seen, inspiring one of golf’s immortals, Bobby Jones, to marvel, “He’s playing a game I’m not familiar with.’’

The son of a pharmacist, Charlie Nicklaus, who was a scratch golfer, Nicklaus won a record 18 majors over a quarter-century span in which he eclipsed the legendary Arnold Palmer, then vanquished all comers, winning the Masters six times, the PGA five times, the U.S. Open four times, and the British Open three times.

“The thing that sets golf apart from other sports is that it takes self-confidence, an ability to rely totally on yourself,” Nicklaus once said. “When I’m through, what I’ll really miss is kicking myself to get it done. I can live without the week of playing the Masters. But the really satisfying time is the three weeks leading up to the Masters when I’m preparing for it.”

Only Tiger Woods (15 majors) has even come close to the dominance displayed by Nicklaus, who also finished second in 19 majors and won 117 tournaments, including 73 on the PGA tour, which ranks third to Woods and Sam Snead (82 apiece on the PGA circuit).

Until withdrawing from the British Open in 1998 with a degenerative hip condition at age 58, Nicklaus played in a record 154 consecutive majors for which he was eligible, far eclipsing runner-up Tom Watson (87).

“Over the years, scores of golfers have whipped golf courses—overpowered them,’’ Frank Deford wrote in Sports Illustrated in 1978, when the magazine named Nicklaus its Sportsman of the Year. “Nicklaus has won with golf courses, by driving, putting, attacking, thinking—by playing whatever sort of golf was required of him at that particular moment. The uniqueness of Nicklaus, his definition, is that rarely has he ever fought a golf course, so utterly is he in consonance with his sport, with its substance and spirit.’’

Nicklaus, who began playing at age 10 and was mentored by club pro Jack Grout, who would become the golfer’s lifelong instructor, was 12 when he won the first of five straight Ohio Junior titles and was 15 when he qualified for his first U.S. Amateur. He was a soft-bellied 17-year-old senior when he played in his first U.S. Open in 1957, missing the cut; he was a 58-year-old grandfather when he played in his last major.

Two years later, in the U.S. Open played at Oakmont, near Palmer’s hometown of Latrobe, Pa., Nicklaus made the leap into stardom when he defeated the charismatic Palmer in a 18-hole playoff. At 22, Nicklaus was the youngest U.S. Open champion since Jones won at 21 in 1923, which led to his appearance on the cover of Time Magazine. A rivalry was born, though it proved to be one-sided. Palmer won the British Open in 1962, and the Masters in ’64, when he was still just 34. But he never won another major; the era of Nicklaus and Palmer both winning championships lasted less than two years.

“In his prime he was hell on spikes,’’ Reilly wrote. “The Nicklaus of the ’60s and ’70s was head and shoulders above everybody else, but mostly head. He was the supreme thinker, never distracted by the bells and the trophies and emotions of the thing. He was only interested in the nuts and yardage and sweat of it.’’

Nicklaus played the Masters in Augusta, Walter Bingham of Sports Illustrated wrote, like a “burglar picking a lock in the dark.” At 23, he won the Masters for the first time in 1963, making him at the time the youngest Masters champion ever, and became the first golfer to win back-to-back Masters in 1965 and ’66, breaking Ben Hogan’s course record by three shots and finishing nine strokes ahead of Palmer, at the time the biggest margin of victory ever in the Masters. When he repeated in ’66, Jones quipped:  “We have decided you will just have to put the green jacket on yourself.”

“He was not homespun like Sam Snead, not funny like [Lee] Trevino,’’ Reilly wrote. “His pants didn’t need hitching like Palmer’s. Instead, he won over America with pure, unbleached excellence.’’

There would be so many memorable shots, including these three : a 1-iron onto the 72d green at Baltusrol, followed by a 22-foot birdie putt for a final-round 65 to break Ben Hogan’s 72-hole U.S. Open scoring record in 1967; a 9-iron on the 16th hole at Firestone in the third round of the PGA that clears a treetop by inches and a pond in front of the green by just a few steps; and the 12-foot putt for eagle at 15 at the 1986 Masters during a stunning final-round 65 at age 46, which was followed by an embrace of Jackie, his oldest son and caddie that day, which the father lists as one of the most memorable moments of his career.

Nicklaus’ legacy lives on in another way: He is one of the world’s foremost designers of golf courses, operating Nicklaus Designs with his four sons and son-in-law.

“My golf game can only go on so long,” he once noted, “but what I’ve learned can be put into a piece of ground to last beyond me. I’ll always be part of golf because I’ll have the courses. Building a golf course is my total expression.”