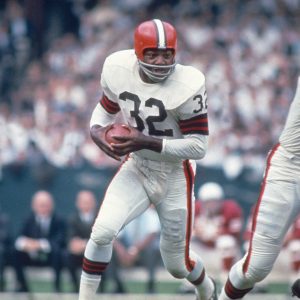 Beyond all the accolades, trophies and pages devoted to his achievements in the record books, Jim Brown’s place in the pantheon of football legends could not have received a more vivid affirmation than on the Sunday afternoon in 2016, 50 years after Brown retired, when coaching great Bill Belichick gathered his New England Patriots football team at Brown’s statue outside of Cleveland’s FirstEnergy Stadium for a brief history lesson after their victory over the Browns.

“I think honestly, any person—football or otherwise—can learn a lot from Jim Brown and what he represents and stands for,’’ Belichick told reporters later. “Jim Brown, in my opinion, is the greatest player that ever played.

“I have so much more respect and appreciation for him, knowing him well as a person and a friend [than] just an observer from a distance. He’s meant so much to this game. He’s paved the way for all of us, players and coaches, as part of many people who have made professional football the great game that it is.’’ Bill Belichick explains why he took Patriots to visit Jim Brown statue – New England Patriots Blog- ESPN

In many cases, athletes from distant eras suffer in comparison to their contemporary peers, who are often bigger and stronger than those who played in a world captured mostly on black-and-white film. That is not the case with Jim Brown, who remains the standard by which all running backs in the National Football League are judged. He also used his platform as a football star and the film industry’s first black action star, with leading roles in The Dirty Dozen, Ice Station Zebra and many other films, to become an outspoken social activist, especially on matters of race. . “I have never done anything more important,” he has said, “than working for social change.”

Brown played just nine seasons in the NFL, after starring in four sports at Syracuse University—football, basketball, track and field, and lacrosse—before making the shocking announcement on the London set of the movie, “Dirty Dozen,” that he was retiring from football to pursue acting full-time. At the time, he was just 30 years old and the NFL’s biggest star, having just won his third MVP trophy after rushing for 1,544 yards in a 14-game season, 677 yards more than the runner-up, Bears rookie Gale Sayers.

“Too many players stay too long. Too many players rely on the game. I retired at the peak of my career,’’ he would say later. “I didn’t retire because I was broken down and slow. I retired because it was time to retire and do other things.”

Born on the island of Saint Simons in Georgia and raised by his grandmother, Brown at the age of 8 moved to Manhasset, New York, on Long Island, where his mother worked as a domestic. He was a five-sport star at Manhasset Secondary School, playing football, lacrosse, baseball, basketball and running track. He continued as a multisport star at Syracuse, which later inspired the school to create an 800-foot tapestry at the Carrier Dome depicting Brown in his football and lacrosse uniforms with the words, “Greatest Player Ever.’’

From the time he was drafted by the Browns sixth overall in 1957, Brown’s talent left opponents in awe. In his ninth game as a pro, the Cleveland fullback rushed for 237 yards, setting an NFL single-game record that stood unsurpassed for 14 years and a rookie record that remained for 40 years.

“He’s just the best back in the league,’’ Los Angeles Ram defensive tackle Glenn Holtzman said. “Fast as the fastest, hard as the hardest. He gets off to the quickest start of any big man I’ve ever seen. An arm tackle is no soap; he runs right through you. The only way I’ve found to stop him is to hit him right at the ankles with your shoulder…otherwise, it’s like tackling a locomotive.”

An All-Pro in eight of his nine seasons, Brown had led the league in rushing eight times and was the league’s record-holder for single-season and career rushing yards, rushing touchdowns and total touchdowns. A chiseled, 6-foot-2 and 232 pounds, Brown never missed a game in his nine years in the league. Entering the 2021 season, he remained the only back in NFL history to average 100 or more yards rushing per game.

Leaving at the apex of his career only added to his mystique.

“God gave me a combination of skills,”  Brown said. “I was 232 pounds, six-feet-two. I had enough strength to be uniquely physical. And there are times when the game depends on that physicality. We called those ‘attitude’ plays. And that’s where you go at a man to get one yard and you want to tear him up. But did I want to hit people? Of course not. My job as a running back was to get as much yardage as I could get, and if I could do that without touching a single defensive player, it would not mean a doggone thing to me. It was never my job to see how many guys I could hit.’’

Though Brown’s records for most yards in a season and all-time rushing yards have fallen, his stature among the game’s great running backs has not diminished.

“Jim was a dominant specimen,” said Hall of Fame running back Barry Sanders. “He was physically strong but also just a beautiful runner. He had quickness, he had vision for finding open space, but he could also run you over. When you talk about the best players ever, who would you put ahead of him? He was dominant. I know I wasn’t dominant. Not like Jim. Jerry Rice, maybe? Lawrence Taylor was dominant. I can’t think of anybody I would put ahead of him.”

Cleveland teammates recalled Brown before games sitting alone in the locker room, staring ahead. “I had never been in the presence of anybody who prepared the way Jim did,” says Ernie Green, who played halfback alongside Brown in Cleveland. “Obviously Jim had the physique and the body to do it all. He could run over people, he could outrun people. But he would spend an awful lot of time visualizing the role he was about to play. And at all times, Jim enjoyed his own space in the world. You got to know him as well as you could, but there was a limit to that.’’

Brown is in the College Football Hall of Fame, the Pro Football Hall of Fame and the Lacrosse Hall of Fame. He seized upon his celebrity stature to speak out an array of social issues, spearheading a public show of support among other black athletes for Muhammad Ali’s draft resistance in 1967 and organizing the Black Economic Union, which assisted more than 400 African-American-owned businesses in the ’60s and ’70s. In 1987, after years of work in the inner city, Brown started the Amer-I-Can program, an effort to reintegrate gang members into productive society.

Belichick has visited prisons with Brown and supported his work with at-risk youths.

“He’s a guy who has a handle on life,” Belichick said. “He’s worked with the worst of the worst, the baddest of the bad, and he can get them under control. Really an incredible man. I hope people understand that.’’