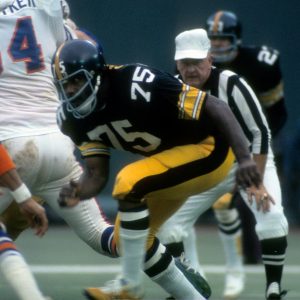 Charles Edward “Mean Joe” Greene earned his place in the National Football League’s Hall of Fame as one of the greatest defensive tackles of all time, a 6-foot-4, 275-pound blast furnace of fierceness, strength, speed and unquenchable passion for winning that transformed the Pittsburgh Steelers into a perennial champion.

But an unforgettable soft-drink commercial, which drained the menace from Mean Joe and replaced it with an irresistible tenderness, accorded Greene a rarefied place in popular culture that endured long after he retired. Mean Joe, we discovered, was loveable, and America wrapped him in her embrace. All because of a Coke ad. Imagine that.

That’s not to say he wasn’t mean on a football field. He was all of that and more. Greene, who grew up in Temple, Texas, said he was thrown out of most every game he ever played in high school. The nickname came from North Texas State, where he played college football. His teams were known as the “Mean Green.” In the NFL, he became so angry in one game that the refs weren’t calling holding penalties on opposing linemen that he picked up the football and fired it into the stands. Another time, he tore off his helmet and whipped it overhead, shattering it against the goalpost. He also was caught kicking an opponent in the groin, punched another rival in the stomach, and spit in the face of Dick Butkus, regarded by many as the toughest man in the game.

“Butkus didn’t look intimidated,” recalled Steelers linebacker Andy Russell, “but there was Greene, obviously wanting to fight him and fully capable of it, and you could see Butkus thinking, ‘This wouldn’t be the intelligent thing to do.’”

But for all the raw hostility Greene exhibited on occasion while playing his “no holds barred” style, there was enough self-control, discipline, skill and will in his game to make him the centerpiece of coach Chuck Noll’s plan to build the Steelers into a powerhouse.

Noll made Greene the fourth overall pick in the NFL draft in 1969, even though ome Steeler talent evaluator wrote in his scouting report, “I would question taking a boy like this in the first round as he could turn out to be a big dog.”

“This note was prophetic,” Roy Blount Jr. of Sports Illustrated wrote, “only to the extent that it might have conjured up the difficulties involved in trying to block a Doberman pinscher.’’

Greene was born on Sept. 24, 1946, in Elgin, Tex., and grew up in Temple with a single mother, Cleo Thomas. She called him Joe, Greene said, because an aunt thought he bore a resemblance to heavyweight boxer Joe Louis. “She thought I was hefty and bulky enough to be called Joe Louis,” Greene said. “She started calling me Joe, and it kind of stuck.’’

He began his football career at a segregated high school, Dunbar, and was always big. By his senior year, he said, he was 250 pounds.

“I never got into trouble when I was a kid, but it’s strange, I got the reputation of being a bully,’’ he said. “I didn’t deserve it. Before I started playing football, I was getting my butt kicked constantly. It was always some old, little guy. At one point I was more round than tall. I was a bit timid, shy. Then I started playing football, and I guess that all kinda went away.’’

There was nothing timid about Greene at North Texas State, where his coach, Rod Rust, described him as a “fort on foot,” nor in the NFL. In his career with the Steelers, from 1969 until his retirement in 1981, Greene played in 181 of a possible 191 games. He was Defensive Player of the Year in 1972 and 1974, made 10 Pro Bowls, five All-Pro first teams and the NFL’s 75th- and 100th-anniversary teams, and he remains only the second player whose number (75) has been retired by the Steelers.

“He was the greatest third-down player you ever saw in your life,” said Art Rooney Jr., who headed the Steelers’ player personnel department when it drafted Greene.

The Steelers went 1-13 in Greene’s first season, even though he was named the league’s Defensive Rookie of the Year, but winning soon followed. Green was the leader on and off the field of Pittsburgh’s famed “Steel Curtain” defense, winning four Super Bowls in the span of  six seasons between 1974 and 1979.

“I just want people to remember me as being a good player and not really mean,’’ Greene said upon his induction into the Pro Football Hall of Fame. “I want to be remembered for playing 13 years and contributing to four championship teams. I would like to be remembered for maybe setting a standard for others to achieve.’’

And then there was the 1979 Coke commercial. It was built on the theme of “Have a Coke and a Smile,” and shows a limping, defeated Greene walking up a stadium runway when he is approached by a young boy. Initially gruff, Greene softens when the boy offers him his Coke to drink, and the spot ends with a grateful (and smiling) Greene flipping his uniform jersey to the boy. “Thanks, Mean Joe,’’ the kid says.

The commercial won both a Clio and a Cannes Gold Lion and is considered one of the greatest Super Bowl ads of all time. Green never anticipated the impact it would have on his image.

“I was suddenly approachable,” he recalled during a presentation at Coca-Cola headquarters in Atlanta. “Little kids were no longer afraid of me, and older people – both women and men – would come up and offer me a Coke.”

Even after his active retirement as a player, Greene remained a household name for decades.

“It transformed my personal life in terms of how people looked at me,’’ he said. “People would come up to me on the street having no idea I played football…their association with me was from the commercial.

“It means a great deal to me and to my family. Aside from football, it’s been my whole life.”

The ad also took on an unexpected cultural significance, according to Penny Hawkey, the McCann-Erickson copywriter who wrote the script.

“While we didn’t set out to make a great social or cultural statement, we certainly had one,”

Hawkey said. “Joe was perhaps the first black male to appear in a national brand commercial, and it had a profound effect at the time. The letters we got were full of gratitude and excitement.”