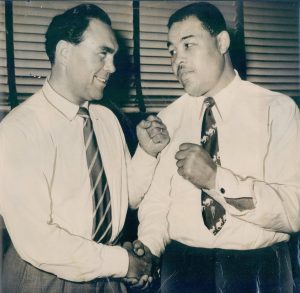 Joe Louis, the grandson of slaves and the great-grandson of a slave-owner, used the fearsome power of his fists to become not only the heavyweight boxing champion of the world but to punch holes in the walls of racism that deprived Black Americans of equal opportunity. In one of history’s supreme twists, white America embraced Louis, too, when he wore the mantle of democracy in his fights against one of Adolf Hitler’s most potent symbols of Aryan supremacy, Max Schmeling.

Louis had fallen in surprising fashion to Schmeling the first time they fought, losing by 12th-round knockout in 1936. But with the Nazis’ iron grip closing fast on Europe, Louis was implored by millions of Americans, including President Franklin Roosevelt, to extract revenge in their 1938 rematch.

It was reported that Hitler called Schmeling just before the fight and ordered him to win for the sake of Nazi Germany. FDR, meanwhile, invited Louis to the White House. “Joe,” he is reported to have told the boxer, “we need muscles like these to defeat Germany.”

This had become more than a title fight. This was a battle of competing ideologies. And before a crowd of 70,000 in New York’s Yankee Stadium, it took Louis just 124 seconds to obliterate Schmeling, sending the German to the canvas, and ultimately to the hospital, with a first-round knockout.

A Black man was heavyweight champion, and unlike Jack Johnson, another Black man who in an earlier era had reigned as champ but was persecuted and ultimately imprisoned for his relationships with white women, Louis’s popularity in both Black and White America soared after his defeat of Schmeling.

Syndicated columnist Jimmy Cannon immortalized Louis as “a credit to his race – the human race.”

Like a later great champion, Muhammad Ali, Louis’s significance transcended the boundaries of a boxing ring. More than a decade before Jackie Robinson shattered baseball’s color line, Joe Louis had become a symbol of hope.

“You have to say that if [Louis] hadn’t lived, this century would have been different,” historian Gerald Early said in a documentary about Louis’s life.

Joe Louis Barrow was born in poverty in 1914, the family home in Lafayette, Alabama, sitting adjacent to a cotton field. Louis and his seven siblings often slept three and four to a bed. His mother, Lily, joined the great Black diaspora in which many Blacks headed north in search of greater opportunity, Lily and her children settling in the Black Bottom Neighborhood of Detroit when Louis was 12. Louis began boxing at the Brewster Recreation Center and dropped Barrow from his name in a futile attempt to keep his fighting a secret from his mother, his success as an amateur (he won 50 of his 54 amateur fights, 43 by knockout) bringing him to the attention of John Roxborough, who ran the gambling rackets in Detroit’s Black communities. Roxborough provided Louis with a respected trainer, Jack Blackburn, and a skilled promoter, Julian Black, their combined efforts paving the way for Louis to achieve greatness and ultimately fight for record purses, rewarding Roxborough’s investment.

At the age of 20, Louis quit his assembly-line job and turned professional in 1934. Among his notable conquests early in his career were former champions Primo Carnera and Max Baer. Louis won his first 27 fights, 23 by knockout, but his designs on the heavyweight crown were temporarily delayed by his 1936 loss to Schmeling, his first professional defeat. But a year later, on June 22, 1937 in Chicago’s Comiskey Park, he got his shot at the crown against James Braddock. Louis was knocked down early in the fight but knocked out Braddock in the eighth round. He was the champion, the Brown Bomber.

He reigned as champion for 12 years, longer than any heavyweight champion in history, defending his title 25 times.

“It was vindication,” said poet Maya Angelou of Louis’s status as champion. “Some black mother’s son, some black father’s son, was the strongest man in the world.”

Louis’ career was interrupted by his enlistment in 1942 in the U.S. Army, for whom he fought dozens of exhibitions in the interest of boosting morale and recruiting African-Americans into the armed services.

Louis retired from boxing in March 1949, but troubles with the IRS compelled him to return to the ring. He lost his first match after returning, champion Ezzard Charles pummeling him into submission, but he went on to win eight more professional fights, including two against Jersey Joe Walcott, before suffering his third career loss at age 37 to the undefeated Rocky Marciano. That loss, in 1951, prompted Louis to retire for good.

During his 17-year career Louis achieved a 66-3 record, with 52 knockouts. He and Schmeling ultimately became friends, and when Louis died on April 12, 1981, President Ronald Reagan saluted him as “more than a sports legend—his career was an indictment of racial bigotry and a source of pride and inspiration for people around the world.

Honoring his family’s request, the president made it possible for Sgt. Joe Louis to be buried in Arlington National Cemetery with full military honors. In 1982, Louis was posthumously awarded the Congressional Gold Medal. Detroit has honored his legacy in numerous ways – including the former Joe Louis Arena, the Joe Louis Greenway, a statue in the lobby of the TCF Center (formerly Cobo Hall), and “The Fist,” a bronze sculpture by Robert Graham at the intersection of Woodward and Jefferson avenues.

Among boxing aficionados, Louis and Ali are regarded as the greatest heavyweight fighters of all time. Who would have won had they fought each other? Many have attempted to answer that question, with both fighters having their supporters. This is what boxing writer Graham Conner wrote for ESPN in 2016.

“I consider Louis the greatest of all heavyweight champions in terms of physical tools. He was a superb fighting machine. At about 6-foot-2 and 200 pounds, he would have been the smaller man in the ring, but he would also have been the puncher in the fight. Louis might have been able to put heavy pressure on Ali — moving in behind the jab, getting off with sharp, hard hooks and right hands, especially if Ali went to the ropes. One must think back to Louis’ first fight with the smaller Billy Conn, though, when he was clearly outboxed for 12 rounds before winning in the 13th. Ali would have been able to avoid sustained punishment by moving this way and that, and his snaking left jab and crisp rights, backed up by some well-judged combinations, would have scored points. The Verdict: Ali by decision in a grueling fight.’’