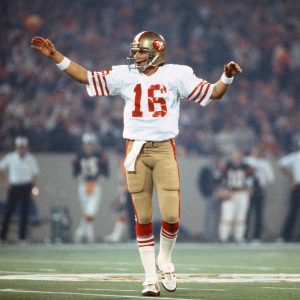 For a generation of football fans, Joe Montana personified “Joe Cool”—not in a flamboyant, own-the-room way like Broadway Joe Namath of New York Jets fame, but as the utterly unflappable quarterback who calmly and methodically found a way to win even under the most daunting odds.

Montana played in four Super Bowls for the San Francisco 49ers and won all of them while being named Super Bowl MVP three times. Only Terry Bradshaw of the Pittsburgh Steelers has won as many Super Bowls without a loss. Montana also won a collegiate national championship at Notre Dame, joining Namath (The University of Alabama and the Jets) as the only quarterbacks ever to win both a Super Bowl and an end-of-season collegiate No. 1 ranking.

The man who described himself as “quiet and sort of laid back,” was a master of late-game comebacks, directing his teams—the 49ers and Kansas City Chiefs—to 31 fourth-quarter come-from-behind wins, including a 92-yard drive in the closing minutes of Super Bowl XXIII in 1988 against Cincinnati which he capped by throwing a 10-yard a touchdown pass to John Taylor with just 34 seconds left.

His six-yard touchdown pass to a leaping Dwight Clark of the 49ers at the back of the end zone in the 1981 NFC Championship Game with 58 seconds left to beat the Dallas Cowboys is the stuff of enduring legend, known simply as “The Catch.”

“He’s got this resourcefulness, this something that’s hard to put into words,” Montana’s mentor, former 49ers coach Bill Walsh, told Rick Telander of Sports Illustrated. “He won’t choke. Or rather, if he ever does, you’ll know everyone else has come apart first.”

Montana already had displayed his refusal to wilt at Notre Dame. As a sophomore, he was down 30-10 with 13 minutes left against the Air Force Academy and rallied the Fighting Irish to a 31-30 win. In his final game at Notre Dame, the Cotton Bowl as a senior, Montana was suffering from hypothermia so bad he was pumped full of bouillon at halftime. Nonetheless, he took a team that was down 22 points with 7:37 left and pulled out a 35-34 victory, scoring the last touchdown—in an ice storm—with two seconds left.

Montana’s comebacks extended to his ability to return to the field from an array of significant injuries: back surgery, concussions, a numb left foot, knee problems, and radical elbow repair. In 1992, after missing 31 consecutive games due to an injury to his throwing arm, Montana made a dramatic comeback. In the second half of the regular season finale, a Monday Night Football game against Detroit, Montana displayed some of what became known as “Montana Magic,” completing 15 of 21 passes for 126 yards and two touchdowns as the 49ers defeated the Lions 24-6.

Unlike some of his contemporaries, like Dan Marino, John Elway and Jim Kelly, Montana did not possess a cannon arm—when he was drafted by the 49ers in 1979, scouts described his arm as average, one reason he wasn’t picked until the third round. His greatest attribute, in his own words, was this:

“What I have is recognition,’’ he said. “The ability to see everything on the field. Position the other team to death. Keep the ball alive and keep it moving forward. Then, at the right moment, knock them on their ass. Own the field.’’

Montana won the NFL’s passing title in both 1987 and 1989. He topped the NFC in passing five times (1981, 1984, 1985, 1987, and 1989). Thirty-nine times he passed for more than 300 yards in a game, including seven times in which he surpassed 400 yards. His six 300-yard passing performances in the post-season were an NFL record. At the time of his retirement, he also owned the career playoff record for attempts, completions, touchdowns, and yards gained passing.

Eleven times the New Eagle, Pa., native led his team to the playoffs, winning nine divisional titles along with his Super Bowl victories. After playing the first 14 seasons of his career with the 49ers, Montana was traded to Kansas City for his final two seasons, leading the Chiefs to their first AFC Championship game in 1994. Six years later, he was inducted to the Pro Football Hall of Fame.

But Montana’s aura was never about the numbers.

“You may not vote for him for class president, but you certainly would get on your knees to have him as your best friend,” former 49ers president Carmen Policy said. “If you had a chance to go out with anybody, anytime, and really feel good about yourself, it’s Joe Montana you want to be with.”

Montana, like Tom Brady, the quarterback who would later obliterate many of his playoff records, cut a modest figure physically, but he was a great athlete, his talents extending beyond the football field. He pitched three perfect games in Little League back in Monongahela, Pa., and turned down a basketball scholarship to North Carolina State.

But while he considered N.C. State as a possible landing spot because of a chance to play two sports, football ultimately won out. As a junior, Montana became the starting quarterback at Ringgold High, and after his senior year, Parade Magazine named him to its high school All-American team. He accepted a scholarship to Notre Dame, and fame and fortune soon followed. He always wore that fame modestly.

“Joe was the superstar who didn’t want to be a superstar,’’ 49ers lineman Harris Barton said. “He was last in line at the lunch buffet and last at the shoe stand in the equipment room.”