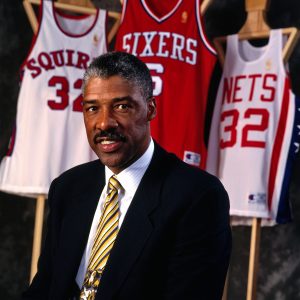 There may be a handful of basketball players greater than Julius Erving, but for artistry, showmanship, creativity, innovation and originality—the ability to lift fans out of their seats to marvel at sights they had never before witnessed—Dr. J is in a class of his own. Gravity imposed no boundaries on Erving, who inspired succeeding generations of players to literally elevate their games to a mid-air spectacle of dazzling hang time, slam dunks and flights of boundless imagination.

If one play can define the wonder that was Dr. J, it was his legendary “Baseline Move,” when he was playing for the Philadelphia 76ers in the 1980 NBA finals against the Los Angeles Lakers. Erving drove along the right baseline, elevated with the ball even as the 7-foot-2 Kareem Abdul-Jabbar tried to block his progress with outstretched arms, brought the ball down as he remained suspended in midair, slipped behind the backboard until he had crossed to the other side of the hoop, then reached back in-bounds with a soft, underhanded scoop shot into the basket.

“Here I was, trying to win a championship, and my mouth just dropped open,’’ recalled another NBA Hall of Famer, Magic Johnson, a rookie at the time. “He actually did that. I thought, ‘What should we do? Should we take the ball out or should we ask him to do it again?’’

Erving’s on-court splendor was matched by his regal bearing, consummate professionalism and commitment to living with dignity and empathy for others.

About the nickname: When he was growing up in the Long Island town of Roosevelt, N.Y., Erving.said he and a friend, Leon Saunders, gave each other nicknames. “I started calling him “The Professor”, and he started calling me “The Doctor,”. Erving said. “So it was just between us.’’ The basketball world embraced the nickname, and a teammate in the American Basketball Association, Fatty Taylor, added the “J.”

Erving took an unconventional path to basketball immortality, playing his college basketball at the University of Massachusetts in the lightly regarded Yankee Conference before signing as an undergraduate free agent in 1971 with the Virginia Squires of the American Basketball Association. Though he may have been little more than a rumor to basketball fans outside of Amherst, Mass., the pros were on him, as he was drafted by both the ABA and NBA.

“My God, did you see those meat hooks?” Virginia coach Al Bianchi said, referring to what Papanek mused had to be among the world’s biggest hands, measuring 11 inches from pinky to thumb.

During his rookie season, as he was driving on two giants, the 7-foot-2 Artis Gilmore and the 6-foot-9 Dan Issel, Erving said it dawned on him that there were no limits on what he could do on a basketball court.

“I went in between both of them and just hung there and waited for them to come down. Then I dunked on them so hard I fell on my back,’’ he told the Boston Globe. “Just doing that made me confident to go after anyone, any time, anywhere without any fear.’’

Erving, instantly recognizable by his magnificent Afro, may not have singlehandedly brought about the ABA-NBA merger in 1976, but his spectacular play, especially after he was traded by the small-market Squires to the New York Nets prior to the 1973-74 season gave the league with the red, white and blue ball credibility and hastened his entry into the NBA. In his five ABA seasons, Erving won two championships, three MVPs and three scoring titles.

Locked in a salary dispute with the Nets, Erving was sold to the Philadelphia 76ers less than 24 hours before the start of the 1976-77 season, and helped the Sixers to the NBA finals. His wizardry was now on display for all the basketball world to see, and he used the ’77 All-Star Game to showcase all of his wondrous talents, winning the MVP award.

“He was no longer a cult act playing smoky halls half full of aficionados who had become hip to him by word of mouth,’’ SI’s Alexander Wolff wrote.

In 1980, Dr. J and Abdul-Jabbar were the only active players named to the NBA’s 35th Anniversary All-Time team. The MVP of the 1980-81 season, when he scored 24.6 points per game while setting career highs in assists and steals, Erving was named the league’s MVP, though the Sixers lost the NBA finals to Larry Bird’s Celtics after taking a 3 games to 1 lead. After other near-misses, Erving would finally win his first NBA title in 1983, sweeping the Lakers in four straight games.

In 1987, Erving retired at age 37, having scored more than  30,000 points in his combined ABA and NBA careers. He averaged 22 points a game in his 11 seasons with the Sixers, 28.7 ppg in his five ABA seasons. In 1993, he was elected to the Naismith Memorial Basketball Hall of Fame and chosen to the NBA’s 50th anniversary all-time team, and in 1994 SI included him on its list of the 40 most important athletes of all time.

All the while, Erving championed a long list of humanitarian causes– the national chairman of the Hemophilia Foundation; the coach of the Special Olympics basketball program; the adviser to The March of Dimes; the spokesman for the Lupus Foundation, American Dental Association and Philadelphia Police Athletic League; the endorser of the American Red Cross, Population Institute, Pennsylvania Adult Education and dozens of other charities.

He was a successful businessman in retirement, owning a Coca-Cola bottling plant in Philadelphia, serving as a TV analyst, and with former NFL running back Joe Washington fielding a NASCAR Busch Series auto racing team, becoming the first NASCAR racing team at any level with minority ownership.

“There have been some better people off the court—like a few mothers and the pope,” Pat Riley, who faced Erving while coach of the Los Angeles Lakers, told Sports Illustrated.  “But there was only one Dr. J the player.”