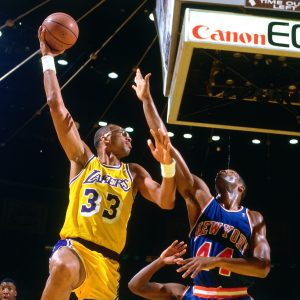 He is basketball royalty, reflected in his chosen Muslim name—Kareem Abdul-Jabbar, which means “noble, powerful servant.’’ By the time he ended his 20-year career at age 42 in 1989, the 7-foot-2 Abdul-Jabbar was the all-time scorer and leader in blocked shots in NBA history and had accumulated a dazzling list of personal and team accomplishments that remain unmatched in league annals: six-time MVP, 19-time All-Star, two-time NBA Finals MVP, member of the NBA’s 25th-anniversary all-time team, and winner of six NBA championships, one with the Milwaukee Bucks and five with the Los Angeles Lakers. He would subsequently be named to the 50th and 75th anniversary all-NBA teams as well.

Abdul-Jabbar’s signature was his sky hook, a high-altitude shot that transcended the boundaries of any defense designed to stop him.

“A normal shot is easier to triangulate,” he explained to Sports Illustrated. “The three corners of the triangle are your eyes, the ball and the rim, and most players shoot from near their eyes. But on the sky hook the ball is way up here, and that difference in triangulation keeps most players from getting the coordination of it.

“(Laker teammate) Magic Johnson has asked me to show it to him, but he has never been able to get it right. It’s almost exactly like Zen Buddhism—you center on your inner calm and your target, isolate everything else until you and your objective become one.”

Abdul-Jabbar, who never had a major injury in his career except for two self-inflicted hand fractures, was a marvel of physical conditioning far ahead of his peers in incorporating such progressive elements as yoga and martial arts and meditation into his workout routines, contributing to his remarkable durability.

“I don’t know how he does it,” Lakers general manager and Hall of Famer Jerry West, who retired at 36, once said. “My last year or two I’d walk into the locker room before a game, not knowing how in hell I could possibly get myself up to play. My legs were dead, my ankles and body were sore. It would take someone to annoy me, to grab or elbow me during the game, to get me going.”

As testament to a life well lived, Abdul-Jabbar also left an enduring legacy off the court as a scholar, author, film maker, activist, social commentator and champion of racial and social justice. In May, 2021, the NBA created the Kareem Abdul-Jabbar Social Justice Award, which rewards a current NBA player for pursuing social justice efforts.

“I’ve moved on,” he said at age 68. “At this point in my life I want to do things that are more important. I figure I have a platform and a voice, so I might as well use it. And I’ve gone into it all the way. No half-step. Talk about ironies: I’m in this position now, the writer and not the target anymore.”

Born Ferdinand Lewis Alcindor in New York City in 1947, the only child of Lewis Sr. and Cora Alcindor, the young Alcindor, who towered over his peers, became a schoolboy legend at Power Memorial Academy, scoring a city record 2,067 points while winning 71 straight games. UCLA coach John Wooden had never laid eyes on Alcindor before he came west to Los Angeles to play for the Bruins in 1965, and tried to tamp down expectations, asserting that Abdul-Jabbar’s presence would not automatically translate into championships. “Anybody who believes that is only displaying his ignorance,” Wooden said.

But Wooden’s warning fell on deaf ears, after Alcindor, whose height was complemented by a guard’s agility, an advanced understanding of the game, and a fierce commitment to teamwork, scored 31 points, grabbed 21 rebounds and blocked seven shots as his freshman team beat the varsity—two-time defending NCAA champions and ranked No. 1 in preseason—by 15 points. Freshmen could not play for the varsity at the time, but Alcindor scored 56 points as a sophomore in his varsity debut and led the Bruins to three straight national titles, losing just two games—both by a single basket—in his collegiate career. His mastery of the slam dunk led the NCAA to outlaw the shot after his first season, but no matter—Alcindor was named the tournament’s Most Outstanding Player three times, the only player before or since to pull off that triple.

Many years later, Alcindor would pay tribute to the impact Wooden—“The Wizard of Westwood”—had on his life. Wooden, he said, “taught me a whole lot about becoming a man, which had nothing to do with basketball. It had to do with living your life as an intelligent human being.’’

Before his senior year at UCLA, Alcindor converted to Islam and took his Muslim name, legally adopting Kareem Abdul-Jabbar in 1971, shortly after winning his NBA title in his second season with the Milwaukee Bucks, who drafted him No. 1 overall in 1969. With Abdul-Jabbar combining with veteran guard and future Hall of Famer Oscar Robertson, the Bucks won 66 games in the regular season, went 12-2 in the playoffs, and swept the Baltimore Bullets in four games, only the second Finals sweep in NBA history. Abdul-Jabbar won his first scoring title and was voted MVP, the first of four MVP awards he would win in his first seven years in the league.

The Bucks won four division titles but did not repeat as champions, and after the 1974-75 season, Abdul-Jabbar, seeking a richer cultural life than Milwaukee could provide, requested a trade to New York or Los Angeles. Bucks GM Wayne Embry complied, trading Abdul-Jabbar to the Lakers for a package of three players. With the arrival of Magic Johnson in 1979, “Showtime” was born, the fast-breaking style that would carry Abdul-Jabbar to his greatest success—8 trips to the NBA finals in the next 10 seasons, including five titles, the last in 1987-88, when the Lakers defeated the Detroit Pistons in seven games to repeat as champions in consecutive years. Abdul-Jabbar would cite beating the Celtics in Boston Garden in the 1985 finals–when the Lakers recovered from a 34-point defeat in Game 1 and Abdul-Jabbar, written off as washed up at age 38 after that stinging Game 1 loss, would win Finals MVP–as the most satisfying title of his career.

“I feel I’ve made my mark,’’ he said. “After what we did against Boston, I can walk away from the game forever and no one can say anything about lack of championships or talent. Maybe some people think I should have quit after the championship, because it would be fitting. But life doesn’t work that way. Cyrano de Bergerac was going to die sword-fighting 50 men—but he died after a piece of timber hit him on the head.’’

A jazz aficionado whose father was a Juilliard-trained musician, Abdul-Jabbar suffered a devastating loss in 1983, when a fire in his Bel Air mansion destroyed all of his possessions, including his prized jazz collection. But the outpouring of public support in the aftermath of that fire touched Abdul-Jabbar, and was a factor to a softening of what he admitted was a cultivated public aloofness that made him appear unapproachable.

Sports Illustrated’s Richard Deitsch once shared with Abdul-Jabbar an observation by L.A. Times columnist Jim Murray, who wrote: “No man is an island, but Kareem gave it a shot.”
“Have you finally come off the island?” Deitsch asked.

“Oh, definitely,’’ Abdul-Jabbar replied. “The island, that’s not a good place to be, but I thought I could do that and play the professional game and not be bothered. I was wrong.’’

He expanded on that theme in an interview with the Orange County Register. “The ‘80s made up for all the abuse I took during the ‘70s,’’ he said. “I outlived all my critics. By the time I retired, everybody saw me as a venerable institution. Things do change.’’