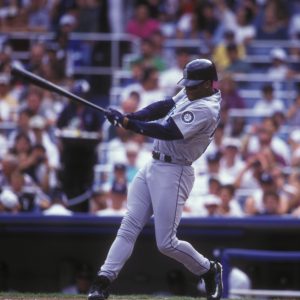 He had the swing, the smile, the grace, the presence, the signature look—his baseball cap, worn backwards. He had the pedigree—the son of an All-Star. He had the swagger, without the haughtiness. He was cool. He brought joy, launching balls into the seats, snatching other balls back from the other side of the fence. He was The Kid, long after his birth certificate said otherwise. And there was a time, before his body betrayed him, when serious people thought that center-fielder Ken Griffey Jr. was destined to become the best player the game of baseball had ever seen.

There was never any doubt, though, that Griffey Jr., born on the same date (Nov. 21) in the same town (Donora, Pa.) as Stan Musial, would like Stan the Man claim a place in the Hall of Fame. Griffey fell just three votes short of being a unanimous choice for induction to Cooperstown in 2016, the 99.3 percent of the 440 votes cast the highest ever received until Mariano Rivera was named on all 425 ballots cast in 2019.

In a career that spanned four decades—Griffey broke into the big leagues in 1989 and retired after the 2010 season—Griffey hit 630 home runs—seventh on the all-time list–stole 184 bases, posted a .907 OPS and batted .284, all the while playing peerless defense in center field, with long, elegant strides and a powerful throwing arm.

“What really sets him apart,” said Lou Piniella, who managed Griffey Jr. in Seattle, “is that he does it with his glove, too. He does it on both sides of the ball while playing a premium position.”
Griffey is the son of Ken Griffey, who spent 19 years in the big leagues and was a three-time All-Star.

“Dad impressed me once,” Junior told Sports Illustrated shortly after he turned pro in 1988, when the Mariners drafted him No. 1 overall. “That was when he hit a home run and was named MVP of the 1980 All-Star Game. Mostly, it didn’t matter what he did. He was just Dad.”

After finishing third behind two pitchers (Gregg Olson and Tom Gordon) in Rookie of the Year voting in 1989, when he made his big-league debut at the age of 19, Griffey dominated the ‘90s, an All-Star selection and Gold Glove winner for 10 consecutive seasons and a unanimous choice as the American League MVP in 1997. In 1995, he also played a starring role in the most dramatic moment in Mariners history, one that might have saved baseball in the Pacific Northwest: circling the bases in textbook-perfect precision on Edgar Martinez’s double to beat the Yankees in walk-off fashion in the deciding game of the AL division playoffs.

Griffey led the league in home runs four times during the decade, finished second, one home run behind Juan Gonzalez in 1993, and third, three home runs behind Mark McGwire in 1996. He missed most of the 1995 season with a broken wrist, but over the last four seasons of the decade he averaged 52 home runs. By the time he turned 30, after the 1999 season, he had more home runs by age 30 than any player ever, and only six players had eclipsed his Wins Above Replacement (70.7) by that age, all ranked among the greatest who had ever played: Babe Ruth, Hank Aaron, Mickey Mantle, Rogers Hornsby, Mel Ott and Jimmie Foxx.

And he did it all with a style and panache with few equals. His swing, sports columnist and author Joe Posnanski wrote, “was majestic, gorgeous, the Grand Canyon of swings, the Machu Picchu of swings, the ‘Here Comes the Sun’ of swings. It tilted upward, and when bat met ball, you could feel the breath rush out of your body.’’

Unlike many of his contemporaries during baseball’s Steroid Era, most notably Barry Bonds (like Griffey Jr. the son of a former major leaguer and the player to whom he was most often compared in debates about the game’s best player), Griffey’s feats were not tainted by accusations that he had used performance enhancing substances.

But just when it appeared a given that Griffey Jr. would rewrite baseball’s record book, the trajectory of his career took a downward turn. After requesting a trade to Cincinnati to be closer to his Florida home, Griffey remained productive in his first season with the Reds, hitting 40 home runs, driving in 118 runs and being named to the All-Star team for the 11th successive season, first in the National League.

But he tore a hamstring in September of 2000, beginning a succession of hamstring, knee, quadriceps and hip injuries that would drastically curtail his playing time for the balance of his career. Over the next six seasons, Griffey would average just 92 games and 324 at-bats. He made two more All-Star teams but never won another Gold Glove or Silver Slugger award, never led the league in a major hitting category, and ultimately, slowed by age and injury, relinquished center field, moving to a corner outfield position in 2007.

There would be a few more shining moments, one coming in the inaugural World Baseball Classic in 2006, when he would bat .524 while hitting three home runs. Another was in 2009, when he signed a one-year contract to return to Seattle and hit a home run on Opening Day. His teammates carried him around the field on the final day of the season, and he signed another one-year deal to return in 2010.

But on June 2, 2010, 23 years to the day that he was drafted, Griffey retired from baseball.
“It’s tough to close the book on a ballplayer like Ken Griffey Jr.,’’ Mariners teammate Mike Sweeney said. “There’s going to be a big void that will never be filled. You can’t match a Ken Griffey Jr., what he has accomplished on the field, his heart. You can’t replace Ken Griffey Jr.’’