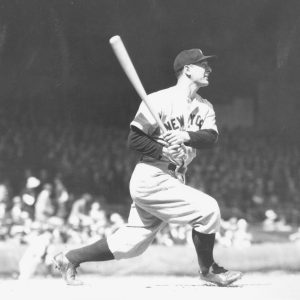 The contemplation of a happy ending to a heroic story evaporates in the moment you learn that the protagonist is remembered most for a terrible disease bearing his name. So it is for Lou Gehrig, who on merit ranks as one of the greatest ballplayers ever to grace a baseball diamond. His legacy is most defined by the seeming indestructibility suggested by his staggering record for consecutive games played, and the suddenness with which his mortality was exposed by amyotrophic lateral sclerosis, the neuromuscular disease that robbed him of life at age 37. More than 80 years later, ALS, or as it is commonly known, Lou Gehrig’s Disease, is still without a cure.

Gehrig, whose nickname was The Iron Horse, played in 2,130 consecutive games, a streak that began in 1925 when the regular New York Yankees first baseman, Wally Pipp, begged out of the lineup with a headache and was replaced by Gehrig. “I took the two most expensive aspirins in history,’’ Pipp later lamented.

Gehrig started every succeeding game until his retirement in 1939, shattering Everett Scott’s record of 1,307 games and setting a seemingly unbreakable standard until Cal Ripken Jr. broke his record in 1995 and ultimately played in 2,632 consecutive games.

“I think Gehrig cared a lot about his streak, and I think he probably cared about it from his rookie season,’’ said a Gehrig biographer, Jonathan Eig. “I think his durability, his strength, was really his greatest source of pride. I think this was part of his character, the reliability that he came to be associated with.

“And I think a big part of it had to do with the fact that it was something Babe Ruth couldn’t do. Babe Ruth had all the glamorous statistics, but Gehrig had his own thing. And I think later in the life, when he began to resent Ruth a little bit, this one was particularly important to him because it represented the one true undeniable department in which he was superior to Ruth.’’

For all that Gehrig accomplished as one of the game’s greatest hitters, it would be his destiny to be overshadowed for much of his career by Ruth, whose slugging already had revolutionized the game by the time Gehrig signed with the Yankees in 1923, after starring at Columbia University.

Ruth batted ahead of Gehrig in the Yankees’ lineup, his No. 3 designating his spot in the lineup just as Gehrig’s No. 4 did his. In temperament, the reserved and quiet Gehrig could not begin to compete with Ruth’s flamboyant personality and insatiable appetite for the public arena. Born to poor German immigrants, he was the only one of four Gehrig children to survive infancy, no doubt a major reason his mother was smothering in her affection. In contrast to the bon vivant Ruth, Gehrig spent most of his evenings at home with his parents until the age of 30. And when Gehrig finally did get married, he evidently felt so guilty about leaving his parents that he gave them the house they shared, and most of his money.

A dominant aspect of Gehrig’s personality was a respect for authority.

“He always approached his job with a grim determination and a deep fear of disappointing his employers, his teammates, and his fans,” biographer Eig wrote.
Gehrig, like Ruth, was a left-handed hitter, and together they formed arguably the most potent combination in baseball history. Gehrig compiled a .340 lifetime batting average, hit 493 home runs. and scored more than 100 runs and recording at least 100 RBI for 13 straight seasons. He led the American League in runs four times, home runs three times, RBI five times, on-base percentage five times and batting average once. He finished among the league’s top three hitters in batting average seven times, and posted eight 200-plus hit seasons.

In 1931, he set the AL record for RBI in a season with 185, and in 1934, he won the Triple Crown, batting .363 with 49 home runs and 166 RBI. Little wonder then, when baseball began selecting All-Star teams in 1933, Gehrig was the AL’s starting first baseman in seven consecutive seasons.

During his 17 seasons, the Yankees won seven pennants and six World Series, a stage on which Gehrig thrived. He batted .361, hit 10 home runs and accounted for 35 RBI in 34 Series games.

But after Ruth’s retirement in 1934, Gehrig soon found himself overshadowed again, by future Hall of Famer Joe DiMaggio, the Yankees winning World Series in each of DiMaggio’s first five seasons, beginning with 1936.

Gehrig’s performance took a significant dive in 1938, and it became obvious in spring training the following season that he was seriously ill, though it wasn’t until later he would be diagnosed with ALS. On May 2 , 1939, just eight games into the season and batting just .143, Gehrig went to manager Joe McCarthy and told him he was benching himself, ending his streak. He was replaced by Babe Dahlgren.

“I didn’t know how to start,’’ Dahlgren would later say. “I knew how Lou must feel. This whole thing must be breaking his heart, what with all the news interest building up to this terrific climax which even Lou was not ready to accept. I know there were tears in our eyes as we looked at each other, and I heard myself saying: ‘Come on, Lou, you better get out there, you’ve put me in a terrible spot.’ I had a choke in my voice by this time, feeling like a culprit going out there on the field in Lou’s place.’’

Six weeks later, on June 19, 1939, Gehrig’s 36th birthday, he received the grim diagnosis. Two days later, the Yankees announced his retirement, and on July 4, scheduled a Lou Gehrig Appreciation Day. Before a sold-out crowd at Yankee Stadium, Gehrig delivered one of the century’s most memorable speeches, later immortalized by actor Gary Cooper in the 1942 film made about Gehrig, “The Pride of the Yankees.”

“Fans, for the past two weeks, you’ve been reading about a bad break,’’ Gehrig began. “Today] I consider myself the luckiest man on the face of the earth.’’

“In the weeks following his tearful speech, Gehrig received more fan mail than he had throughout his entire career,” Eig wrote.

On June 2, 1941, 17 days before his 38th birthday, Gehrig died at his home in the Bronx. His wife, Eleanor, never remarried. “I had the best of it,’’ she said. “I would not have traded two minutes of my life with that man for 40 years with another.”