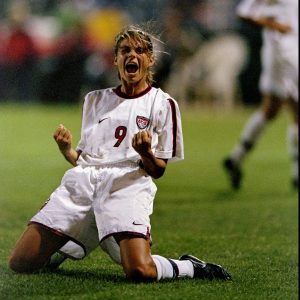 Her name is Mariel Margaret Hamm. The world came to know her as Mia, the nickname bestowed upon her by her ballerina mother, Stephanie, in honor of ballerina Mia Slavenska, with whom Stephanie once studied.  Mia Hamm not only revolutionized women’s soccer, taking it to heights of unimagined popularity, she became the first superstar in female team sports. And, in serving as a role model to millions of young girls who dared to dream big because of her, she was one of those rare athletes who left an indelible mark on the world beyond sport, transcending the soccer pitches upon which she danced like few others before or since.

The measure of her impact was perhaps most vividly illustrated in 2021, when Hamm, who had retired from soccer 17 years earlier was voted for induction into the National Women’s Hall of Fame, “which honors the women of the past, relates the history of women’s struggles, prepares the women of the future, and serves as the voice celebrating the value of women.’’

Hamm was born in Selma, Ala., on March 17, 1972, the same year as the passage of Title IX, the federal amendment that prohibits sex discrimination at federally funded schools and colleges, giving women’s sports—at least in theory—equal footing with men’s sports in terms of opportunity. The fourth of six children, Hamm was born with a partial clubfoot and sharply bowed legs that were wrapped in casts, then fitted in orthotic shoes connected by a steel bar.

“As soon as those things were taken off her feet, you could not stop her,” said Hamm’s sister, Caroline Cruickshank, in an interview with CNN.

The family moved frequently because her father, Bill, was a fighter pilot in the U.S. Air Force. It was during a posting in Italy that Hamm was introduced to soccer, and it was love at first sight.

“Mia was in a park in Italy playing, and the next thing they knew, she went darting across the green. And she was taking away a soccer ball from a kid that was 5 years old, and she was maybe 2,” Cruickshank said.

She was 5 when she joined her first soccer team in Wichita Falls, Texas, and encouraged by her adopted brother Garrett, a Thai-American, she competed freely with the boys in her neighborhood, joining a football team in the seventh grade. Mia and Garrett played soccer together, coached by their father. At 14, Hamm tried out for the North Texas Olympic Development girls’ team in Dallas. Not only did she make the team, but within six months she was on the women’s national team, at 15 the youngest player ever to play for the team. “She had the best acceleration of any soccer player I had ever seen,’’ said national coach Anson Dorrance. “And she had skill and composure. I knew she’d be on the national team. It was just a matter of when.’’ Hamm, Dorrance said, possessed “an uncanny ability to go through defenders, as if by molecular displacement.’’

Two years later, at age 17, Hamm joined Dorrance at the University of North Carolina, where she won four national championships while dominating in a fashion never before seen in collegiate soccer. North Carolina lost only one of the 95 games in which she played for the Tar Heels, and she graduated in 1994 with an NCAA record 103 goals and 72 assists. In 2003, she and basketball great Michael Jordan were named the ACC’s greatest athletes of the conference’s previous 50 years.

What was remarkable is that for all her greatness, Hamm displayed what Sports Illustrated writer Grant Wahl called “the old Hamm paradox—exceptional talent laced with epic self-doubt.’’

“There she was, the greatest woman collegiate soccer player ever, and she was more nervous than anybody,’’ said North Carolina teammate Roz Santana. “But that’s the way Mia is. She puts so much pressure on herself. Even in practice, she is always out of breath, killing herself. She never, ever plays at a comfortable level.’’

Hamm was never comfortable in the spotlight, but the magnitude of her performance, particularly when it continued on an international stage, made it impossible to escape. In time she came to embrace it, less for herself than to promote women’s soccer and awaken a generation of girls to dare to follow in her footsteps. “At some point she agrees, in spite of all her misgivings, to do the Letterman show and the Pert Plus commercial and the Barbie doll and the Gatorade and the Nike sneakers, because people she trusts persuade her that doing so will liberate even more girls who stand on the sidewalk as teams are chosen,’’ Gary Smith wrote in Sports Illustrated. “Convince more girls that anything’s possible, even a Barbie doll that plays soccer.’’

The U.S. women’s team was little noticed at home in 1991, when it won the inaugural FIFA Women’s World Cup in China, the first of four World Cup tournaments in which Hamm would play. By 1999, when the U.S. defeated China on penalty kicks (Hamm converted her attempt), over 90,000 fans packed the Rose Bowl in Pasadena. Another 40 million watched on U.S. television, making the match the most watched women’s sporting event in history. Immediately following the final, Hamm collapsed in the locker room from severe dehydration and was treated with an intravenous drip and three liters of fluids. A week later, Hamm and her U.S. teammates met President Clinton, who had attended the final, at the White House. She had become the face of women’s sports, named one of People Magazine’s 50 Most Beautiful People among a blizzard of accolades.

“The movement needs the face because the face, no longer a pixie tomboy’s, offers the femininity, the beauty and the naked passion that the sport and the camera need,’’ Smith wrote.

“The face needs the movement because it offers the sense of mission, the justification for all those solitary three-a-day workouts, that a Hamm needs.”

Before retiring in 2004, Hamm won two World Cups and two Olympic gold medals. She also helped launch the first women’s professional soccer league in the U.S., where she played for the Washington Freedom from 2001 to 2003 (the league did not last). She held the record for most goals scored in international competition (158) until 2013, and used her platform to advocate for Title IX and gender equality. After the death of her brother Garrett in 1997, she also launched the Mia Hamm Foundation   to research bone marrow disease. “I learned so much through him—about perseverance, about grace, about dignity,’’ she said.

She has remained active in soccer on the executive level, as a co-owner of Los Angeles FC, a global ambassador for FC Barcelona, and as a member of the board of directors of A.S. Roma.