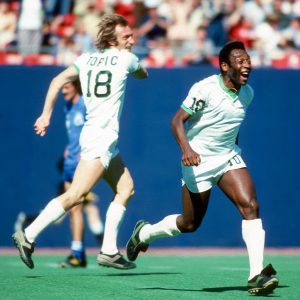 His name was Edson Arantes do Nascimento, a self-described “skinny little black boy” from an impoverished town in southern Brazil who grew up without shoes but became the most celebrated soccer player of the 20th century and one of the most beloved athletes in the world, known universally by his nickname, Pelé (PAY—lay). He led Brazil to its first World Cup championship as a teenager in 1958, and was a member of two more World Cup-winning teams for his native country in 1962 and 1970 that made Brazil the center of the soccer world. By the time he retired, in 1977, he had scored an astonishing 1,283 goals, a total that included goals scored in amateur, unofficial and friendly matches.

In global popularity, only Muhammad Ali rivaled Pelé, who in the course of his career, according to Sports Illustrated, played in 88 countries, visited with 2 Popes, 5 emperors, 10 kings and 108 other heads of state.

Pelé was the recipient of the International Peace Award in 1978. In 1980 he was named Athlete of the Century by the French sports publication L’Equipe, and he received the same honor in 1999 from the International Olympic Committee.

“When God created him [Pelé], he put every quality a footballer needs; speed, strength, impulse, technique, kicking ability, heading, dribbling – all of it, everything that a player might have,’’ said Zico, the great Brazilian star of the ‘70s and ‘80s who ranks Pelé, also known as the Pérola Negra (“Black Pearl”) as the greatest player ever, ahead of Maradona, Lionel Messi and Ronaldo.

“Few people could jump like him for a header. He is 170 centimeters (5-foot-7) tall. His foundations are perfect, [he had] mastery of the ball, [and mastery of] headers. He improved in every way. Everything you can imagine from a player, Pelé has done it.”

Pelé (he is uncertain of his nickname’s origins) first vaulted onto the international stage as a 17-year-old in the 1958 World Cup in Sweden, where he was the youngest player in the tournament.  Because of a knee injury sustained before the tournament, he was on the bench in Brazil’s first two World Cup games. But after he was cleared to play by the team doctor, Pelé was inserted into the lineup for the last game of the opening round, nearly scored in the first four minutes, then assisted on the team’s second goal in a 2-0 win over the Soviet Union. In the quarterfinals four days later he scored the only goal in a 1-0 victory against Wales, which he would later describe as “my most unforgettable goal,” because of the impetus it gave Brazil toward claiming its first world title. He scored three goals in the semifinal against France and two goals in Brazil’s 5-2 victory over host Sweden in the Cup final. In all, Pelé scored 6 of Brazil’s 11 goals in the concluding rounds of the tournament.

“After many of them he would sob uncontrollably,’’ Ian Thomsen of Sports Illustrated wrote. “He could not quite believe that all would turn out well. To him the game moved slowly, as in a trance, and each time he achieved his objective it had the effect of shaking awake the barefoot child from his feverish dream, which in fact was not a dream at all.’’

Pelé was the first teenager to score in a World Cup final, a feat unmatched until Kylian Mbappe of France did so in the 2018 Final. The Brazilian government declared him a national treasure after the 1958  World Cup, in part to ensure that he would remain in Brazil and not succumb to lucrative offers from European clubs. He remained with the Santos Football Club, which he had joined in 1956, and with Pele playing left inside forward, Santos won nine Sao Paulo league championships and, in back-to-back years (1962 and 1963), won the Libertadores Cup and the International Cup. Santos, capitalizing on Pelé’s popularity, toured internationally; in 1967, during Pelé’s visit to Nigeria, a 48-hour ceasefire was declared in that nation’s civil war so that fans could watch him play.

At the 1962 World Cup, Pelé tore a thigh muscle in the second match and sat out the remainder of the tournament, which Brazil nevertheless won for its second Cup title. Brazil was knocked out in the first round of the 1966 tournament, but with Pelé back in 1970, Brazil won its third World Cup with a team—captained by defender Carlos Alberto—that is widely regarded as the greatest team of all time. Brazil became the only team to beat the European champion (Italy), the South American champion (Uruguay) and the defending World Cup champion (England) en route to winning the Cup, the third title allowing them to retire the trophy in perpetuity.

Pelé retired in 1974, but a year later agreed to a three-year, $7-million contract with the New York Cosmos of the North American Soccer League, which hoped to capitalize on his popularity to grow the sport in the U.S. He retired after leading the Cosmos to the league championship in 1977, with over 76,000 fans filling Giants Stadium for his final game, an exhibition between Santos and the Cosmos.

In 1999, Pelé won the FIFA Player of the Century balloting as chosen by a committee and readers of FIFA’s official magazine (Maradona won in Internet voting).“I sometimes feel as though football was invented for this magical player,” said the great English star, Sir Bobby Charlton.

In retirement, Pelé championed numerous humanitarian causes, including world peace, children’s rights and poverty alleviation. Appointed a UNESCO Goodwill Ambassador, Pelé was given the “Children in Need” award in 2012, and in that same year was awarded an honorary doctorate by the University of Edinburgh in recognition of his lifetime achievements.