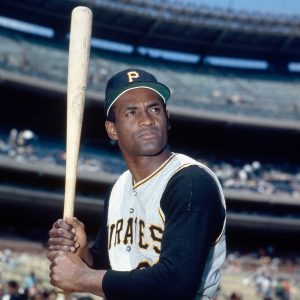 Roberto Clemente was a great baseball player and a better human being, a native of Carolina, Puerto Rico who paved the way for succeeding generations of Latin American players with the same fierce pride, dignity and courage that Jackie Robinson displayed while shattering baseball’s color line.

A plaque in Cooperstown celebrates Clemente’s credentials as a Hall of Fame right fielder. He was renowned for his extraordinary throwing arm, his bold daring on the basepaths and afield, and a free-swinging approach at the plate that produced 3,000 hits and 13 seasons in which he batted .300 or better.

“Clemente was our Jackie Robinson,’’ Puerto Rican broadcaster, journalist and Texas Rangers media relations man Luis Mayoral told Sports Illustrated. “He was on a crusade to show the American public what a Hispanic man, a black Hispanic man, was capable of.’’

The Roberto Clemente Award, annually given to the major leaguer “who best represents the game of Baseball through extraordinary character, community involvement, philanthropy and positive contributions, both on and off the field,” points to the enduring impact of the man, long after he died in a 1971 plane crash while delivering relief supplies to the victims of an earthquake in Nicaragua.

“He would rather be late for a meeting with the governor than pass by a stranger who needed help with a tire,” his wife Vera once said.

When the Pirates won the World Series in a seven-game thriller over the New York Yankees in 1960, Sports Illustrated noted, Clemente skipped the team party to walk the streets of Pittsburgh to thank the fans. And after the Pirates won the World Series again in 1971, Clemente used his postgame TV interview to break with protocol and thank his parents back in Puerto Rico in Spanish, saying in his native tongue, “On this, the proudest day of my life, I ask for your blessing.’’

Clemente was born on Aug. 18, 1934, the last of seven children born to Luisa Walker de Clemente. His father, Melchor, worked as a foreman for a sugarcane mill. The Clemente family was struck hard by tragedy. One daughter, Ana Iris, was 5 when she died after her silk dress caught fire. Two brothers died young of cancer, and Roberto’s eldest sister, Rosa, died in childbirth.

Clemente was 17 years old when he began playing with Santurce in the Puerto Rico League. A Brooklyn Dodgers scout (and later GM), Al Campanis, conducted a tryout for 71 players. Campanis sent the other 70 players home, fixing his sights on Clemente. “He was the greatest natural athlete I have ever seen,” Campanis said.

The Dodgers signed him in 1954 for $10,000 and elected to place him on their Triple-A roster, which meant he could be drafted by another team after the season. The legendary Branch Rickey, the former Brooklyn GM who had moved on to Pittsburgh, selected him first for the Pirates for $4,000, taking great delight in robbing his former team of a man who would have become the greatest outfielder in the team’s history.
He made his debut with the Pirates in 1955 and the following season batted .311, the first of his .300 seasons, all the while enduring a litany of indignities, such as being called “Bob” by the media instead of his given name, being quoted talking in broken English, and finishing eighth in MVP voting after leading the Pirates to the ’60 World Series title, the award instead going to teammate Dick Groat.

But he quickly became a fan favorite, in part because he had such deep affection for people. His closest companion in Pittsburgh was a postal worker named Phil Dorsey, and he regularly took dinner with an accountant and his family. He also was known for playing with neighborhood kids, swinging at bottle caps they would throw to sharpen his batting eye.

He was never better than he was in the 1971 World Series, when he led the Pirates to a seven-game triumph over the Baltimore Orioles, beating the favored Orioles with his bat, glove, arm and speed.

“During the ’71 Series, people said to me, ‘My God, does he always play like that?’ Pirates GM Joe Brown told SI. “And I said, ‘Yes. Always. You’re not seeing anything that we don’t see day in and day out.’ ”

Clemente also became saddled with the reputation of being something of a hypochondriac, often describing a host of injuries, most of which did not keep him from performing wonders on the baseball field. In the last game of the 1971 season, Clemente collected his 3,000th hit, a double off Mets left-hander Jon Matlack. His teammate Steve Blass, later a Pirates broadcaster, has a vivid memory of the occasion.

“He has one foot on the bag, and his hands are on his hips,’’ Blass recalled to Sports Illustrated. “The fans are cheering wildly, but he is just standing there, like a statue, the essence of dignity and pride and grace. That is my freeze-frame of him, how I picture him to this day.’’

Three months later, he would be dead, the prop-driven DC-7 he had boarded after helping load it with supplies for earthquake victims crashing into the sea. Unbeknownst to Clemente, the plane’s copilot had had his license suspended for 180 days that year, and earlier in the month he had smashed the very same plane into a concrete wall while taxiing. The plane had barely been used in four months. The flight engineer was an unqualified mechanic, and the cargo was two tons over the limit.

One nun wrote to his widow, “He fell into the water so that his spirit could be carried by the ocean to more places.’’

The Hall of Fame suspended its normal five-year waiting period and held a special election to vote Clemente into the Hall of Fame. He was inducted into Cooperstown in 1973.
‘When I heard he died,” wrote Pittsburgh columnist Phil Musick, “I wished that sometime I told him I thought he was a hell of a guy. Because he was, and now it’s too late to tell him there were things he did on a ball field that made me wish I was Shakespeare.