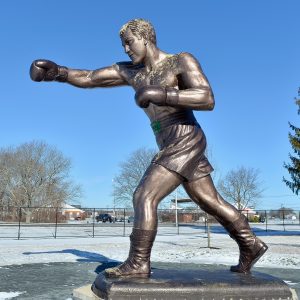 Rocco Francis Marchegiano, the son of a poor shoe-factory worker who grew up in gritty Brockton, Mass., during the Depression, was a failed baseball player. He had hoped to be a catcher.

“There were 40 or 50 of us shagging balls for Rocky,” said Nicky Sylvester, a boyhood friend. “He wouldn’t give anyone else a chance. Two hours of hitting!”

Of one thing, Rocco was certain: He did not want to follow in the footsteps of his father, Pierino. “I’ll never work in a shoe factory,” he told his family, according to his brother Sonny. “I have to find a way out.”

Introduced to boxing by his uncle, Rocco began boxing after being drafted into the Army during World War II, and when he failed to impress the Chicago Cubs in a postwar tryout in 1947, Rocco turned to boxing in earnest. On March 17, 1947, fighting under the name of “Rocky Mack” to protect his amateur status, he made his pro debut against one Lee Epperson, who was fighting in his hometown of Holyoke, Mass. The purse was $35. In the third round, “Mack” hit Epperson with a right uppercut that knocked Epperson through the ropes and out of the ring.

Epperson would never fight again. Rocco returned to the amateur ranks, won the New England AAU Heavyweight championship the following spring, then turned pro, this time under a new name that he never relinquished: Rocky Marciano.

“I never thought he’d make it,” said Goody Petronelli, another Brockton amateur fighter who one day would train middleweight champion Marvin Hagler. “He was too old, almost 25. He was too short, he was too light. He had no reach. Rough and tough, but no finesse.”

Petronelli would not be the last to underestimate the thunder in Rocky Marciano’s right fist—he nicknamed his sledgehammer overhand right “The Susie Q.”–or his preternatural ability to withstand punishment. He not only became the heavyweight champion of the world, but never lost any of his 49 fights, 43 of which he won by knockout, still the only undefeated heavyweight champion in history.

“Rocky couldn’t box like [Gene] Tunney, and probably couldn’t hit like [Joe] Louis, but in one respect he had no challenger,” wrote Pulitzer Prize winner Red Smith. “He was the toughest, strongest, most completely dedicated fighter who ever wore gloves. Fear wasn’t in his vocabulary and pain had no meaning.”

A physical fitness fanatic, Marciano knocked out his first 16 opponents, nine in the first round. By then he was being mentored by esteemed trainer Charley Goldman, who instructed the squattish, 5-10 ¼ inch Marciano—who had just a 68-inch reach, shorter than any heavyweight champ who ever lived–to fight out of a crouch.

“Charley taught the technique that if you are short, you make yourself smaller,” said Goldman’s assistant, Angelo Dundee, who would become famous as Muhammad Ali’s trainer. “Charley let him bend his knees to a deep knee squat. He was able to punch from that position, come straight up from the bag and hit a heck of a shot. . . . It was just bang-bang-bang-bang-BANG and get him outta there.“

In the 38th fight of his career, on Oct. 26, 1951 in New York’s Madison Square Garden, Marciano fought an aging Joe Louis, the former heavyweight champ who had vacated his title when he retired two years earlier but was on the comeback trail at 37. Despite his age, Louis was a betting favorite, many observers pointing to his superior size (3 ½ inches taller and nearly 30 pounds heavier than Marciano) and much longer reach.

One was long-time boxing writer Ed Fitzgerald, though he expressed his admiration for Marciano.

“Rocky is not in there to outpoint anybody with an exhibition of boxing skill,” Fitzgerald wrote. “He is a primitive fighter who stalks his prey until he can belt him out with the frightening right-hand crusher. He is one of the easiest fighters in the ring to hit. You can, as with an enraged grizzly bear, slow him down and make him shake his head if you hit him hard enough to wound him, but you can’t make him back up. Slowly, relentlessly, he moves in on you. Sooner or later, he clubs you down.”

Marciano knocked out Louis, a boyhood hero, in the eighth round, and afterwards wept in Louis’ dressing room.

“Imagine looking at Joe Louis lying there on the ropes,” he said afterwards. “And I did it. I don’t know if I’m happy about it.”

Louis retired permanently.  Eleven months later,  on Sept. 23, 1952, in Philadelphia, Marciano would have the signature moment of his career when he fought heavyweight champion Jersey Joe Walcott. Walcott was 38, but supremely confident that the brawling Marciano was no match for him. “Write this down,” he told reporters. “He can’t fight. If I don’t lick him, take my name out of the record books.’’

Walcott stunned Marciano by knocking him down in the first round, the first knockdown of Rocky’s career. Marciano recovered, but by the 13th round Walcott was comfortably ahead on points; Marciano’s only chance was via knockout. He bore in on Walcott relentlessly in the 13th, and as Walcott feinted toward the ropes, Marciano suddenly dropped him with a short overhand right, striking him in the jaw with such force that it distorted his face, dropped him to a knee, and knocked him unconscious.

The bell would ring again, he’d be right back on you.”

“The Brockton Blockbuster,” a hero to Italian-Americans, defended his title six times, including a rematch against Walcott that lasted just one round and two tough fights against Ezzard Charles. In Marciano’s final defense, against Archie Moore on Sept. 21, 1955, in Yankee Stadium, Moore knocked down Marciano in the second round.

“He (Moore) had hit him right if ever I saw a boxer hit right, with a classic brevity and conciseness,” the great New Yorker writer A.J. Liebling wrote in his collection of boxing pieces, “The Sweet Science.”

But again, Marciano recovered, knocking out Moore in the ninth round.

“After a fight with Marciano, you felt like someone had been beating you all over the body with a blackjack, or hitting you with rocks.” Moore said.

Seven months later, Marciano, at 32, announced his retirement. On Aug. 31, 1969, a day before Marciano’s 46th birthday, he died in the crash of a small plane in a cornfield in Newton, Iowa.