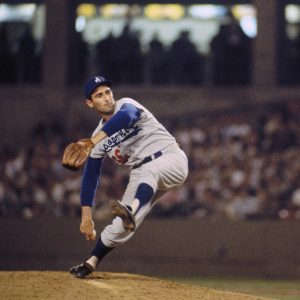 Sandy Koufax was dubbed the “Left Arm of God,” which suggests some manner of divine perfection. At his best—that narrow slice of his career from 1962-66 when there may have never been a better pitcher in baseball history—Koufax appeared more myth than mortal, rendering even the game’s greatest hitters helpless. “Hitting against him is like drinking coffee with a fork,’’ Hall of Famer Willie Stargell once said.

In that span, the Dodgers’ left-hander threw no-hitters in four consecutive seasons, including a perfect game on Sept. 9, 1965. He won 111 games and lost just 34, with an ERA of 1.95, and twice was named World Series MVP, in 1963 and in 1965, when, as an observant Jew, he famously refused to pitch on Yom Kippur, then came back on two days’ rest to win Game 7 against the Minnesota Twins. He led the National League in ERA all five of those seasons, and became the first man to win three Cy Young Awards (1963, 1965 and 1966) at a time when the prize was given to only one major leaguer, winning at least 25 games and striking out at least 300 batters in each of his trophy seasons.

When Dean Chance was voted the Cy Young winner in 1964, he was apologetic. “I’m not the best pitcher,’’ Chance said. “Koufax is. He may be the greatest pitcher who ever lived. Everyone knows he can’t be beat when he’s right. That’s what you call a pitcher. I really admire him.”

But what may have been seen as endowed by a higher power was accompanied by all-too-human uncertainty in the first half of Koufax’s storied career and, later, crippling arthritis in that blessed left arm that the native of Brooklyn. N.Y., cited as the reason he shockingly walked away at age 30 in 1966. Koufax had been contemplating retirement for more than a year, even though, in the last 26 days of his career, including a loss in the 1966 World Series, he started seven times, threw five complete-game wins and had a 1.07 ERA.

“I’ve had too many shots and taken too many pills,” he told reporters. “The decision was based partly on medical advice and partly on my own feeling … I don’t want to take a chance of completely disabling myself.”

Originally setting out to play basketball, his favorite sport, the 6-foot-2 Koufax accepted a scholarship to the University of Cincinnati, where he was a starting forward on the freshman team. But basketball coach Ed Jucker also coached the baseball team, and when Koufax volunteered to pitch, he attracted the attention of major league scouts, and on Dec. 14, 1954, he signed with the Brooklyn Dodgers for a bonus of $14,000 and a salary of $6,000. “As soon as I saw that fastball,” Dodgers general manager Buzzie Bavasi said, “the hair raised up on my arms. The only other time the hair on my arms raised up was when I saw the ceiling of the Sistine Chapel.”

Because he was identified by the rules of the time as a “bonus baby,” the Dodgers were obliged to keep Koufax on the major-league roster, depriving him of the normal minor-league progression that might have allowed him to address the wildness that plagued him in the early years of his career. “When he (Koufax) first came up, he couldn’t throw a ball inside the batting cage,” said Hall of Fame teammate Duke Snider.

But while it took nearly six seasons after his big-league debut in 1955 to harness the power of his blinding fastball and confounding curveball, Koufax offered glimpses of the splendor to come. On Aug. 31, 1959, he struck out 18 batters against the Giants, and in Game 5 of the World Series against the Chicago White Sox, he pitched seven innings, allowing just five hits, in a 1-0 loss.

Koufax’s maturity as a pitcher coincided with the Dodgers’ move from the Coliseum, their original home in Los Angeles when they emigrated from Brooklyn in 1958, to the pitcher-friendly environment of Dodgers Stadium in 1962. There he truly proved unhittable: In 86 appearances, he went 57-15, a .792 winning percentage, with a 1.37 ERA, 56 complete games and 23 shutouts.

But it was in 1962 that he also sustained the first major physical setback of his career. He developed Raynaud’s syndrome, a rare circulatory condition, which eventually affected the index finger of his left hand, the blood clot in the finger initially failing to respond to drugs and intravenous injections, which raised the possibility of amputation.

Eventually, he recovered to return for the end of the ’62 season, but by the end of the following season, which he ended by leading a four-game sweep of the Yankees in the 1963 season, Koufax began suffering from traumatic arthritis, which he traced to a fall on a basketball court when he was still in high school in Brooklyn.

Koufax went to extraordinary lengths to keep pitching, which included the use of anti-inflammatories, applying special balms to the affected area, icing his arm for at least 20 minutes after every start, and, in 1966, taking cortisone injections directly into the elbow joint. He couldn’t straighten his left arm–it was curved like a parenthesis. “He had to have a tailor shorten the left sleeve on all his coats,’’ wrote Tom Verducci of Sports Illustrated. “On bad days he’d have to bend his neck to get his face closer to his left hand so that he could shave. And on the worst days he had to shave with his right hand.’’

Yet through it all, he somehow maintained his dominance.

“You talk about the Gibsons and the Drysdales and the Spahns,’’ Hall of Famer Henry Aaron told biographer Jane Leavy. “And as good as those guys were, Koufax was a step ahead of them. No matter who he pitched against, he could always be a little bit better. If somebody pitched a one-hitter, he could pitch a no-hitter.”

In one sense, his abrupt departure cocooned his aura of greatness. We did not bear witness to the inevitable waning of his formidable skills as he aged. He was preserved in memory at the height of his powers, and when he was elected to the Baseball Hall of Fame in 1972, he was 36, the youngest player ever inducted.

“No other baseball immortal in memory retired so young, so well, or so completely,” Leavy wrote. “He may be the last athlete who declined to cash in on his fame. He has refused to cannibalize himself, to live off his past. He remains unavailable, unassailable (and) unsullied.