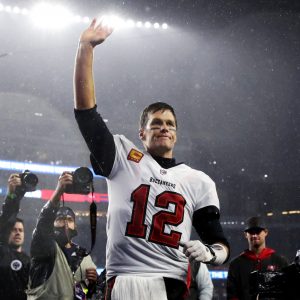 Because of Tom Brady, we now know the secret to becoming the greatest player in National Football League history. Do not let the expectations of others define what you are capable of doing.

Brady was the 199th player selected in the 2000 draft, a sixth-rounder from the University of Michigan who watched as six other quarterbacks were drafted ahead of him. The scouting reports were not flattering: “Skinny. Lacks great physical stature and arm strength,” one scout wrote. “Lacks mobility and the ability to avoid the rush. Lacks a really strong arm. Can’t drive the ball down the field. Does not throw a really tight spiral. System-type player who can get exposed if forced to ad-lib.”

What these evaluations of Brady’s limitations failed to take into account was the depth of his commitment to be far greater than the sum of his parts. Betting on himself that he would, by taking what he had and working ceaselessly and creatively to be better, do things on a football field that few had imagined him doing.

“Brady proved that any kid with perfectly ordinary athletic prospects, the middle-of-the-packer who doesn’t come with some preloaded or far-fetched anatomical gift, can construct greatness,’’ Washington Post columnist Sally Jenkins wrote on the announcement of his retirement. “What made him great was an inner curiosity, an urge to fill in his blanks and see what might happen with enough study and sweat. Here’s the real verdict on him as he retires at age 44: If you study and sweat hard enough for long enough, you can win everything in sight and leave so many unattainable records etched into the books that they might as well be written in granite.

Robert Kraft, the owner of the New England Patriots, the team that drafted Brady, liked to tell the story that upon their first meeting, Brady said:  “Hi, I’m Tom Brady. And I’m the best decision this organization has ever made.” Brady remembers their conversation differently. “I didn’t say that, for the record,” Brady told radio host Howard Stern. “He doesn’t remember as well as I do. I remember saying, ‘You’ll never regret picking me.’’’

Pick your version: Both proved true. Brady played 22 seasons in the NFL, 20 for the Patriots, while playing to an age few thought possible. In his time, he won 7 Super Bowls in 10 appearances–6 with the Patriots, 1 with the Tampa Bay Buccaneers in his first season after leaving New England–5 Super Bowl MVPs and 3 regular-season MVP awards. He is the NFL’s all-time leader in passing yards (84,520), passes completed (7,623) and touchdowns (624), and he far outstrips the competition in numerous statistical categories.

“I am privileged to have drafted and coached Tom Brady, the ultimate competitor and winner,’’ Patriots coach Bill Belichick said in a statement after Brady retired. ”Tom’s humble beginning in professional football ultimately ended with him becoming the best player in NFL history. Tom consistently performed at the highest level against competition that always made him the number one player to stop. His pursuit of excellence was inspirational. Tom was professional on and off the field, and carried himself with class, integrity, and kindness. I thank Tom for his relentless pursuit of excellence and positive impact on me and the New England Patriots for 20 years.”

Brady not only revived a football franchise that had lost in its only two Super Bowl appearances, he was the central figure in what will long be remembered as the Golden Age of Boston sports. New England teams won 12 titles between 2002 and 2019, a period that began with Brady’s first Super Bowl title as a Patriot and ended with his last. In a stretch of six years and four months, the Patriots, Red Sox, Bruins and Celtics all won championships.

“Tommy will go down as the greatest athlete in Boston history,’’ Orr said. “Look at what he has done. It’s just unbelievable. There is no argument.”

Brady’s signature moment as a Patriot came in 2017, when the Patriots staged the greatest comeback in Super Bowl history, rallying from a 28-3 deficit midway through the third quarter to defeat the Atlanta Falcons in Super Bowl LI, 34-28, in overtime.

The game took on added significance for Brady because it came in the wake of what would be dubbed Deflategate, an investigation by the NFL into allegations that the Patriots had used an illegal process for lowering the inflation of game footballs at the behest of Brady, who preferred the grip of softer balls. The league spent around $22 million to investigate, litigate and ultimately discipline the Patriots and Brady for what at worst was a minor rules violation. Brady served a four-game suspension at the start of the 2016 season, a stunning rebuke of one of the league’s marquee players and a slight that he would not forget. At 39, he also was hearing whispers that he might be nearing the end of his storied career.

Brady also came into that Super Bowl burdened by the knowledge that his mother, Galynn, was undergoing treatment for cancer, treatment that had kept her from attending any of her son’s games that season until the Super Bowl.

All of those factors made the comeback all the more sweeter, his father, Tom Brady Sr., told Albert Breer of SI.

“Yes, it did,” he said. “It did. It did. Winning five Super Bowls, and coming back from all the stuff that he was accused of, that was a very difficult thing for the whole family, to be impugned. And lo and behold … It just meant a lot. It just meant a lot because anybody who’s watched him play football for 15 years, in cold weather, in heat, on the road or at home, knows what he’s been.

Brady, who grew up with three older sisters in San Mateo, California, guided the Patriots back to the Super Bowl the next season but despite his record 505 yards passing, the Patriots lost to the Philadelphia Eagles, 41-33. The Patriots made a third consecutive Super Bowl appearance in SB LIII and defeated the Los Angeles Rams, 13-3, Brady connecting with favorite target Rob Gronkowski to set up the game’s only touchdown. The victory enabled the Patriots to join the Pittsburgh Steelers as the only franchises to win six Super Bowl titles.

But after the 2019 season, with the Patriots unwilling to make the long-term contract commitment Brady was seeking, he elected to exercise an option in his contract that allowed him to become a free agent and went to the Buccaneers, signing a two-year, $50 million deal that was fully guaranteed. Brady rewarded the Bucs’ investment by leading the team to his seventh Super Bowl title, a 31-9 rout of the Kansas City Chiefs in Super Bowl LV in which he threw for three touchdowns and was named MVP.

His last game in the NFL ranked among his finest hours, as he brought the Bucs all the way back from a 27-3 deficit against the L.A. Rams in an NFC division playoff game before the Bucs fell, 30-27, on a late field goal. Days after reports surfaced he was retiring, he announced on Instagram that was indeed the case.

“I have always believed the sport of football is an ‘all-in’ proposition — if a 100% competitive commitment isn’t there, you won’t succeed, and success is what I love so much about our game,” Brady said in his statement. “There is a physical, mental and emotional challenge EVERY single day that has allowed me to maximize my highest potential. And I have tried my very best these past 22 years. There are no shortcuts to success on the field or in life.

“This is difficult for me to write, but here it goes: I am not going to make that competitive commitment anymore…’’

In a documentary series produced by ESPN about his life called “Man in the Arena,” Brady said that while he was struggling at Michigan, he saw a sports psychologist named Greg Harden who told him he was responsible for his own performance in the world. That was a pivotal point in his life, he said.

“It’s really a shift in the mind,” Brady told filmmaker Gotham Chopra. “You go from being a victim to being empowered by the fact that you went through something difficult and you learned from it.”