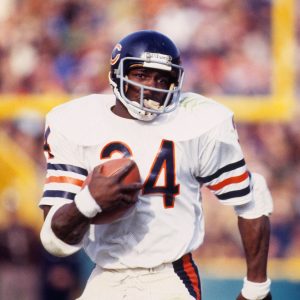 Walter Payton’s place in football history is defined only in part by his performance for the Chicago Bears as one of the greatest running backs ever to play the game, the first man to break Jim Brown’s career rushing record. Payton’s enduring legacy is reflected in the attachment of his name to one of the National Football League’s most prestigious awards, the Walter Payton Man of the Year Award, which recognizes a player for his excellence on the field, and for making a significant positive impact on his community.

The award was established in 1970. It was renamed for Payton in 1999, after one of the most beloved athletes in Chicago history died of a rare liver disease—primary sclerosing cholangitis—at the age of 45, only a dozen years after his playing career ended.

Payton’s nickname was “Sweetness,” an apt description of his playful nature (and high-pitched voice) and his balletic movements in the open field. But it does not reflect the extreme toughness with which he played the game. The 5-foot-10, 204-pound Payton could dance with the best of them—while at Jackson State University, he showed off his best moves on the popular TV show “Soul Train.” But while he  skillfully sidestepped would-be tacklers and left them grasping for air, he would just as often hurtle himself into onrushing defenders, determined to administer as much punishment as he absorbed.

“I had some collisions in my day with great backs, big backs–William Perry, Earl Campbell, Eric Dickerson,’’ Green Bay Packers linebacker Brian Noble said. “Without question Walter was the greatest player I played against. Or saw.”

Payton’s motto, which later would take on added poignancy, was “Never Die Easy,” which he adopted from his coach at Jackson State, Bob Hill.

In the 13 seasons he played for the Bears (1975-87), Payton rewrote the record book, even though for much of his career he was often the only offensive weapon deployed by mediocre Bears teams.

He had 10 seasons with 1,000 or more yards rushing, set the single-game rushing record with 275 yards against the Minnesota Vikings in 1977,  had 77 games in which he rushed for 100 yards or more, and 110 rushing touchdowns. All records at the time.

Payton led the NFL in kickoff returns as a rookie in 1975, then won the NFC rushing title in five consecutive seasons (1976-80). A two-time league MVP (1977 and 1985), Payton played in nine Pro Bowls and was named an All-Pro seven times.

The notoriously prideful Brown looked on with approval when Payton broke his record.

“He follows the code,” Brown said. “The old gladiator code.”

Jim Finks, who was the Bears general manager who drafted Payton fourth overall in 1975, said the rushing record merely reflected one aspect of his value to the team.

“All this folderol about the rushing record has never meant anything to me,”  Finks said. “In fact, Walter’s rushing yards are probably the most overrated element of his play. For instance, there’s no better blocker in the NFL. None. He flattens linebackers; he knocks down ends; he attacks noseguards. And the irony is that he’s competing against a one-dimensional player. When Brown wasn’t carrying the ball, he rested.”

Payton missed one game in his rookie season (trainer’s decision), the only game he missed in his career. He played in 186 consecutive games, testament to his remarkable endurance. That was not the only reason he had the lasting respect of his teammates. His unselfishness was another, manifested by his willingness to block for others.

“How many times did he save my butt picking up a blitz before I was blown up?’’ said quarterback Jim McMahon, who played six seasons with Payton. “A lot. Never once did he say in the huddle, ‘Hey, give me the  ball!’ Whatever we called, he ran. Football has had very few like him.”

Payton, who was born in 1954 in Columbia, Mississippi, attended an all-Black high school, Jefferson High, before transferring to Columbia High, which integrated his senior year. He followed his older brother Eddie Payton, who later carved out an NFL career as a kick returner, to nearby Jackson State University, the Historically Black University where he did it all on the field—ran, caught and threw passes, kicked extra points and field goals, and punted. He scored an NCAA record 464 points, and in his senior year finished fourth in the voting for the Heisman Trophy.

After leading the NFL in kick returns in his rookie season, Payton quickly established himself as a worthy successor to another Bears legend, Gale Sayers, ultimately eclipsing the “Kansas Comet.”

His morning workout regimen of hill sprints became legendary, locals in the Chicago suburb of Arlington Heights referring to his chosen site as “Payton’s Hill.” In the off-season, he returned home to Mississippi and trained on an obstacle course he built on the banks of the Pearl River, running sprints in the grueling summer heat.

With the arrival of Coach Mike Ditka in 1982, Payton would taste playoff success for the first time. Two years later, the Bears beat the Washington Redskins for their first postseason win since 1963 in a game in which Payton threw a touchdown pass to tight end Pat Dunsmore. A week later, the Bears lost to the San Francisco 49ers in the NFC championship, but in 1985, the Bears won their first Super Bowl title, crushing the New England Patriots, 46-10. Payton showed off his musical skills in the “Super Bowl Shuffle,’’ the rap song recorded by the team that sold a half million copies and peaked at No. 41 on the Billboard Top 100, but did not score one of the team’s five rushing touchdowns in the Super Bowl. Ditka later said not calling Payton’s number was one of the biggest regrets of his career.

“It’s possible nobody ever cut like Sayers,”  Ditka said. “And maybe nobody ever ran like Brown or slashed like O.J. (Simpson). But without a doubt Walter is the most complete football player I’ve ever seen.”

Payton was once asked how he would defend against Walter Payton.

Well,” he said, “the night before the game I’d kidnap Walter Payton.”