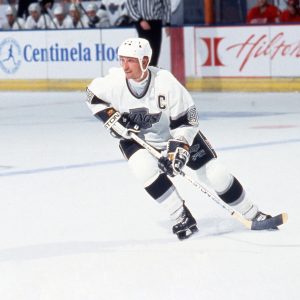 To fully appreciate the magnitude of Wayne Gretzky, simply known as “The Great One” from the time he was a teenager, perhaps it is best to begin here: It is woefully insufficient to contemplate his greatness only in comparison to other hockey players; he is by every statistical measure the greatest ever to lace on a pair of skates—by far. Don’t be fooled by his slight build. Gretzky has earned a place at the table of the best who have ever competed in any athletic endeavor. Babe Ruth, Muhammad Ali, Michael Jordan, Tom Brady, Serena Williams, Jack Nicklaus, Simone Biles. No one who watched The Great One play disputes he belongs in their company.

“I never had the God-given talent of Wayne,” National Hockey League Hall of Famer Phil Esposito once said. “The only guy who had that was Bobby Orr…. But it takes guts to recognize that you have that talent and dedicate yourself to it.”

That dedication began almost from the time Gretzky’s father, Walter, took him skating at age 2 on the Nith River in Brantford, Ontario., below his grandparents’ nearby farm. Soon, a backyard rink built by Walter followed, and by the age of 5 Gretzky was playing on for the Brantford novice-class all-star team, with some teammates twice his age. A legend was already in the making, as Gretzky put pucks in the net at an incomprehensible level from peewee hockey on. In his final season of peewee, during which he turned 11 and wore the No. 9 made famous by his idol, Gordie Howe, Gretzky scored 378 goals with 139 assists in 85 games. He was 4-feet tall and 70 pounds.

He never viewed being undersized as a hindrance, instead turning it to his advantage, even as a professional. It didn’t matter at all that he finished last in strength tests with the Edmonton Oilers.

“I stayed healthy because I could hardly play a crash-and-bang style with my skinny little body,”  said Gretzky, who was listed at 6 feet and 170 pounds when he first turned pro. “The guys who play a physical game grind themselves down because the body can only repair itself so often.”

As so many opponents discovered, it was a fool’s errand trying to hit a moving target as elusive as Gretzky.

His speed was better than average, but nothing extraordinary. And plenty of other players had superior shots.

“With a puck on his stick, though, no one was ever better,’’ E.M. Swift wrote in Sports Illustrated. “And his genius for the game…well, it was as if he could think his way past defenders.’’

Gretzky visualized the game like a Russian chessmaster, parking behind the net and anticipating with uncanny precision where his teammates were to receive a pass or to spot the smallest of openings to create his own shot. He said he had no choice; against players so much bigger than he was, he had to be inventive.

“He likes to carry the puck over the blue line at full speed, then spin on a dime toward the boards,’’ Swift wrote. “If the defensemen sag back, Gretzky moves in and shoots. If a defenseman stops and pursues him, Gretzky passes off to a breaking winger, suddenly in the clear.’’

“There’s such a sense of freedom about him,” Hall of Fame goalie Ken Dryden said. “There’s almost a will-o’-the-wisp quality to the way he skates.”

His passing may have been beyond compare, Dave Stubbs of NHL.com wrote, “a byproduct of endless practice as a boy, his father drilling him in the ‘saucer pass,’ a flip off the ice that would elude a checker’s stick or skate en route to a teammate.’’

“His pass is not like anyone else’s,” Stubbs quoted Colin Campbell, who played part of a season with Gretzky in Edmonton, coached him with the Rangers and is the NHL’s Senior Executive Vice President of Hockey Operations. “It flutters over, under and around things and lands on the stick blade he wants it to land on far too often to be an accident. A part of it is that he hides his intentions, the move he’s likely to make, so well that just about everything is a surprise.”

Gretzky made headlines when he eschewed the National Hockey League at age 17 and signed with the Indianapolis Racers of the upstart World Hockey Association. The financially challenged Racers traded him midseason to the Edmonton Oilers, and the following season Gretzky was in the NHL, which in its zeal to have The Great One acceded to adding four teams from the WHA, including the Oilers.

It didn’t take Gretzky long to win over the skeptics who thought he’d struggle against  superior competition, dominating the NHL the same way he had dominated every level at which he’d played. His No. 99 arguably became the most famous sweater number ever worn on ice.

At age 20, Gretzky obliterated one of hockey’s most hallowed records, the 50 goals in 50 games scored by Montreal immortal Maurice Richard—Gretzky scored 50 in 39 games, scoring four goals in game No. 38 and five in Game No. 39.

During a six-year stretch between 1981 and ’87, Gretzky averaged 73 goals and 130 assists a season. No one in the history of the NHL had ever scored 200 points in a season, and Gretzky averaged better than that over a six-year span. He won the scoring title in each of those seasons, on average, by a mindblowing 73 points.

By the time he retired after 20 seasons in the NHL with the Oilers, Los Angeles Kings, St. Louis Blues and New York Rangers, Gretzky owned 61 NHL records, including a point streak of 51 games and career records of 894 goals and 2,857 points.

He won four Stanley Cup championships with the Oilers during the 1980s; was the league’s MVP nine times, playoff MVP twice, an All-Star 18 times and the leading scorer 10 times. He also won the Lady Byng Trophy for sportsmanship five times.

In 1988, he also was the centerpiece of arguably the biggest transaction in sports since the Red Sox sold Babe Ruth to the Yankees in 1919, going to the Los Angeles Kings from Edmonton in a trade that stunned Canada (headline in the Edmonton Sun: “99 Tears”). Gretzky took the Kings to the NHL finals once but may have single handedly persuaded the league that hockey could thrive in the Sunbelt.

Along the way, he also represented Canada in more than 60 games, including the 1998 Nagano Olympics, the World Cup of Hockey in 1996, and four Canada Cup tournaments.

“You don’t get called The Great One unless you’re something special and Wayne, it goes without saying, was a once-in-a-generation talent,” Howe wrote in his 2014 autobiography “Mr. Hockey: My Story.” “Watching his artistry on the ice was a treat for everyone who loves the game of hockey.’’

Not long after he retired from the Rangers in 1999, the league retired Gretzky’s No. 99, an honor accorded to no other player.

“Gretzky is what athletes are supposed to be, but seldom are — modest to a fault, Macintosh-Apple wholesome, dedicated, an inspirational model for young fans,” wrote Mordecai Richler, one of Canada’s finest novelists. “He’s an anachronism, rooted in an age when a date wasn’t a disco, then your place or mine, but rather a double feature at the local Rialto, then maybe a banana split at the corner soda fountain.“