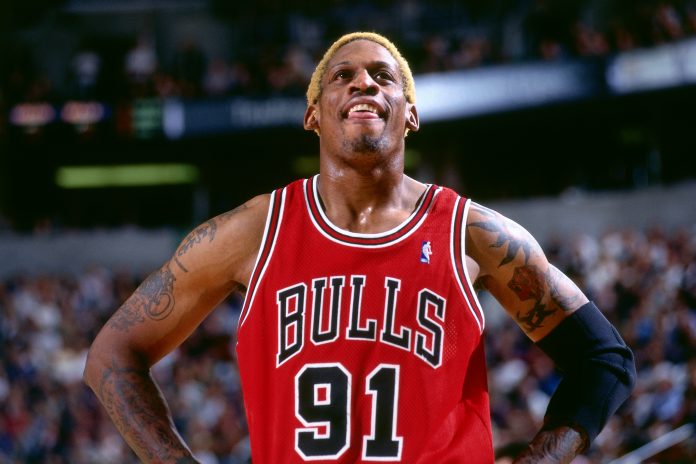 In 1992, Detroit Pistons power forward Dennis Rodman won his first NBA rebounding title with 1,530 rebounds for an 18.7 rpg average. Those were the highest rebounding marks in the league since the Lakers’ Wilt Chamberlain pulled down 1,572 boards for a 19.2 rpg average during the 1971-72 season. Rodman’s total of 1,530 rebounds represented 42.1 percent of the Pistons’ total of 3,631 boards, which is the top individual percentage in NBA history. Rodman went on to lead the NBA in rebounding for seven consecutive seasons, an NBA record. The 27th pick in the 1986 NBA Draft, Rodman is remembered for his tenacious style and unrelenting efforts on the defensive end. Rodman wasn’t much of a scorer, but his defense played an integral role in winning five NBA championships. A 7x NBA All-Defensive First Team member and 2x NBA Defensive Player of the Year, Rodman helped the Detroit Pistons win back-to-back championships in 1989 and 1990. Rodman averaged 10 rebounds and 5 points in the 1989 NBA Finals series. The Pistons defeated Michael Jordan’s Chicago Bulls in the Eastern Conference Finals and went on to sweep the Lakers in the NBA Finals. In 1995, Rodman joined the Bulls playing alongside star teammates Michael Jordan and Scottie Pippen. Rodman’s addition proved to be the perfect fit as the Chicago Bulls went on to win three consecutive titles from 1996-98. Rodman currently ranks no. 23 on the NBA All-Time Rebounds Leaders list (11,954). Rodman was inducted into the Naismith Memorial Basketball Hall of Fame in 2011 and his no. 10 was retired by the Detroit Pistons.