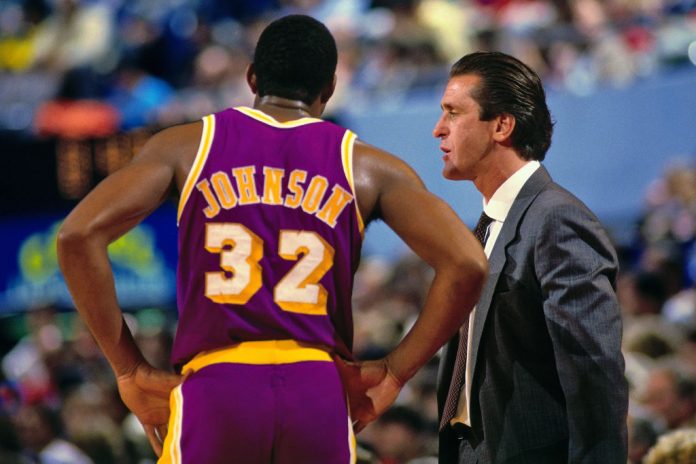 On this day in 2000, Miami Heat head coach Pat Riley recorded his 150th career playoff coaching victory after a 95-85 victory over Detroit in the first round of the Eastern Conference Playoffs. The Heat swept the Pistons 3-0 in the first round, but narrowly lost to the Knicks 4-3 in the 2000 Eastern Conference Semifinals. Riley, one of the most successful coaches in NBA history, would eventually guide the Heat to two NBA championships in 2012 and 2013 serving as Miami Heat team president. As an NBA head coach, Riley compiled a record of 1210 wins and 694 losses in his coaching career with the Los Angeles Lakers, New York Knicks, and Miami Heat. He began coaching during the 1981 season and last coached during the 2007 campaign. Riley was elected to the Basketball Hall of Fame in 2008. The no. 5 winningest coach of all time, Riley’s coaching philosophy preached the power of teamwork. Recognized for ushering in the Lakers â€œShowtimeâ€ era, Riley guided the Lakers to five NBA championships. The Lakers played with an up-tempo style, but it was ultimately Riley’s innovative defense that played a huge role in the Lakers’ success. Riley is a 3x NBA Coach of the Year, 9x NBA All-Star Game head coach, and he is currently still serving as the President of the Miami Heat.