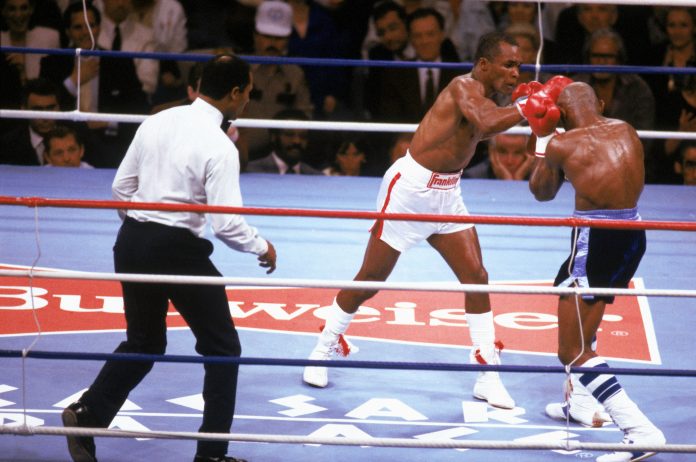 On this day in 1987, Sugar Ray Leonard defeated Marvelous Marvin Hagler in the Middleweight World Boxing Championship bout in Paradise, Nevada. Hagler was the favorite in the matchup, but Leonard won the close contest. Ultimately, Leonard’s superior speed and boxing skills gave him the edge. In the fight, Leonard threw 629 punches and landed 306, while Hagler threw 792 and landed 291. Leonards defense and ring generalship helped him win the split decision. Judge Dave Moretti scored 115 vs. 113 for Leonard, while judge Lou Filippo had it 115 vs.113 for Hagler. Judge Jose Guerra scored the fight 118 vs.110 for Leonard.

One of the greatest boxers of all time, Leonard was a world titleholder in five weight divisions and had a professional record of 36 wins (25 by knockout), 3 losses, and 1 draw. In his amateur career, Leonard won 145-150 bouts and secured two National Golden Glove championships (1973, 1974), two Amateur Athletic Union championships (1974, 1975), a gold medal at the 1975 Pan American Games, and a gold medal at the 1976 Montreal Olympics. The legendary boxer was inducted into the International Boxing Hall of Fame in 1997, the same year he retired from professional boxing.