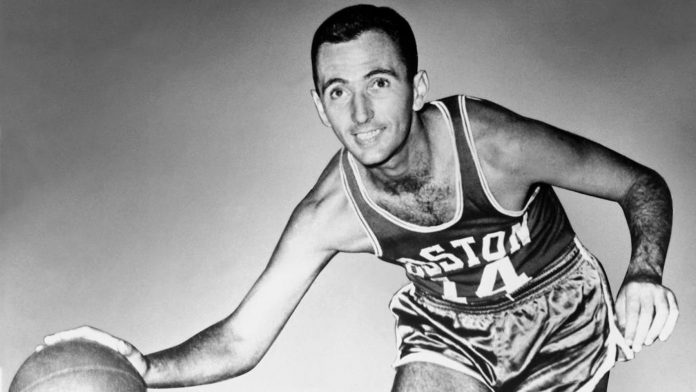 When the Chicago Stags team folded in 1950, the names of three-star players, including Bob Cousy, were put into a hat, and owners of the Boston Celtics, the New York Knicks, and the Philadelphia Warriors each pulled out a name. To the initial disappointment of owner Walter Brown and Coach Red Auerbach, Cousy went to the Boston Celtics for just $9,000. During his first NBA game, Cousy proved to be an asset , ending the season with an average of 15.6 points and 4.9 assists and leading the Celtics to their first winning season in 1951. Cousy’s signature flair, behind-the-back passes, and skill as a point-guard drew crowds and earned him national attention, according to NBA.com. Cousey continued to impress, winning Most Valuable Player of the 1954 NBA All-Star Game, leading the league in assists his first three seasons, averaging 20 points and 7 rebounds and earning All-NBA First Team and All-Star honors. Cousy played his last game on March 17, 1963 to an emotional crowd, his planned 7-minute farewell speech dragged onto nearly 21-minutes in what became known as “”the Boston Tear Party.”” He later became coach for Boston College and the Cincinnati Royals. Cousy briefly stepped back on the court in 1970 to boost ticket sales. In addition to his career on the court, Cousy is also notable for helping organize the National Basketball Players Association (NBPA) in 1954. Prior to the NBPA players received no health benefits and made an $8,000 annual salary. Cousey served as the union’s first president until 1958.