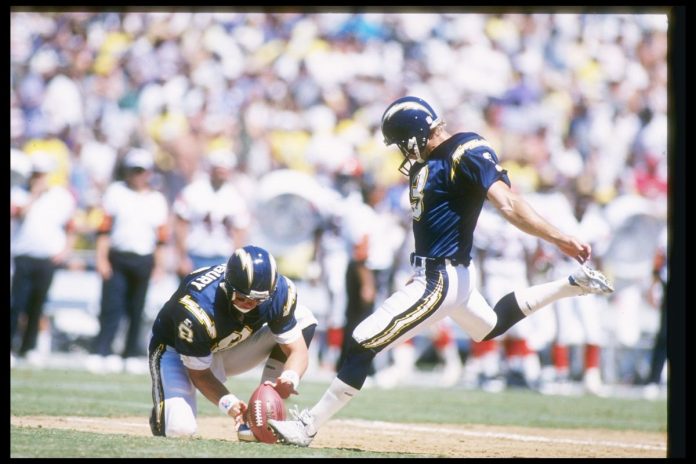 In 1993, San Diego Chargers’ kicker John Carney made six field goals in an 18-17 win over the Houston Oilers. The achievement by Carney set a new NFL record with 29 field goals made consecutively. One of the most prolific kickers in NFL history, Carney played 23 years in the NFL and was the last active player from the 1980s at the time of his retirement in 2010.

Today, Carney is ranked no. 5 on the NFL Total Field Goals Made Career Leaders list with 478. The journey was a long one for Carney who was an undrafted free agent in the 1987 NFL Draft. In total, Carney suited up for eight NFL teams including the Cincinnati Bengals, Tampa Bay Buccaneers, Los Angeles Rams, San Diego Chargers, New Orlean Saints, Jacksonville Jaguars, Kansas City Chiefs, and the New York Giants. Carney is most remembered for the 11 seasons he spent with the San Diego Chargers and the Super Bowl XLIV championship he won with the New Orlean Saints in 2010.

To this day, Carney remains the Charger’s all-time leading scorer. In 1994, Carney earned his first Pro Bowl selection after going 34-38 (89.5%) on field goal attempts as the Chargers made it to the Super Bowl. Carney’s other accolades include First Team All-Pro (1994), Second Team All-Pro (2008), 2x Pro Bowl selections, and a place in the New Orlean Saints Hall of Fame. Today, Carney runs a pre-season kicking training camp in San Diego for professional kickers called The Launching Pad.